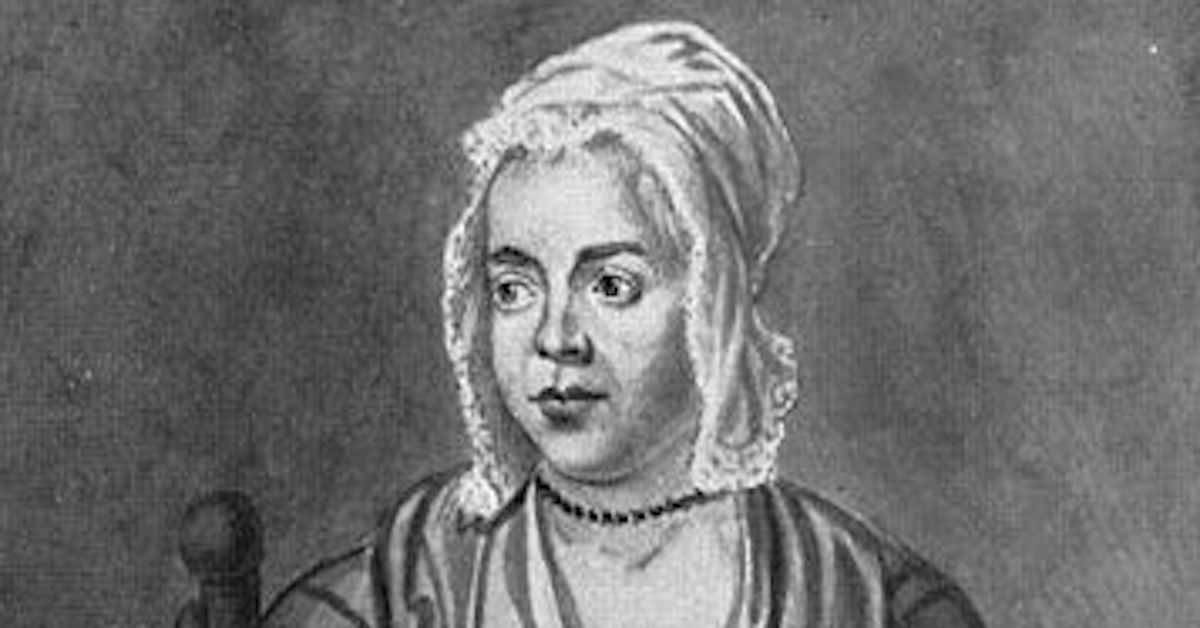 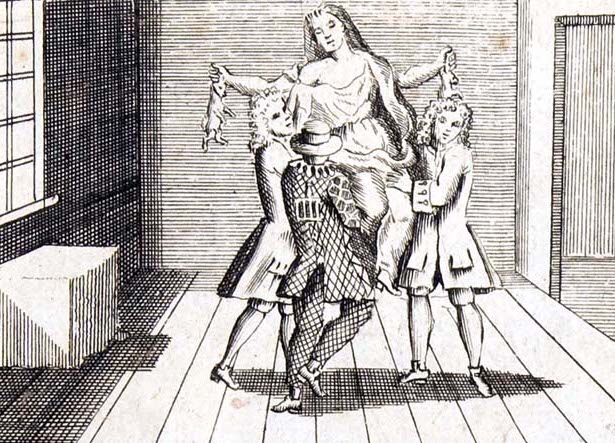 In 1726, a poor woman in Godalming, Surrey named Mary Toft was pregnant, but when she gave birth it was not to a baby. It was to…a creature. From there she gave birth several more times in the same year and all to rabbits. This got the attention of the scientific community throughout Europe, the King of England, the Prince of Wales, and everyone else in England. What exactly was going on here? 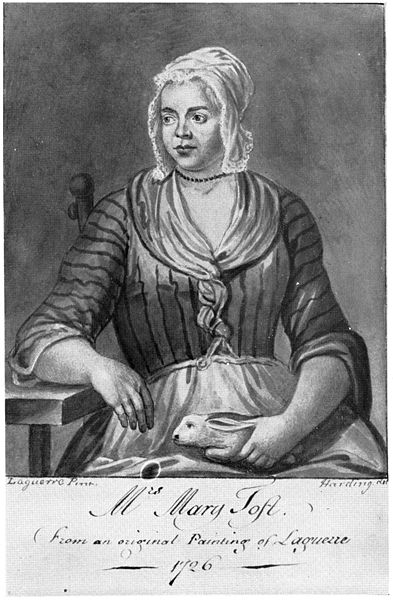 “She gave birth in September 1726 to what looked like a deformed creature.”

Who was Mary Toft?

Mary Toft was about 24 years old and already had three children with her husband Joshua. Her first “baby” was not a rabbit, but a strange creature. She gave birth in September 1726 to what looked like a deformed creature. Someone alerted local surgeon John Howard who dismissed the story at first, but eventually decided to examine her.

He found nothing unusual, but Mary shockingly went into labor again a few days later and again produced animal parts.

According to an account at the time over the next few days Howard delivered “three legs of a Cat of a Tabby Colour, and one leg of a Rabbet: the guts were as a Cat’s and in them were three pieces of the Back-Bone of an Eel … The cat’s feet supposedly were formed in her imagination from a cat she was fond of that slept on the bed at night.” 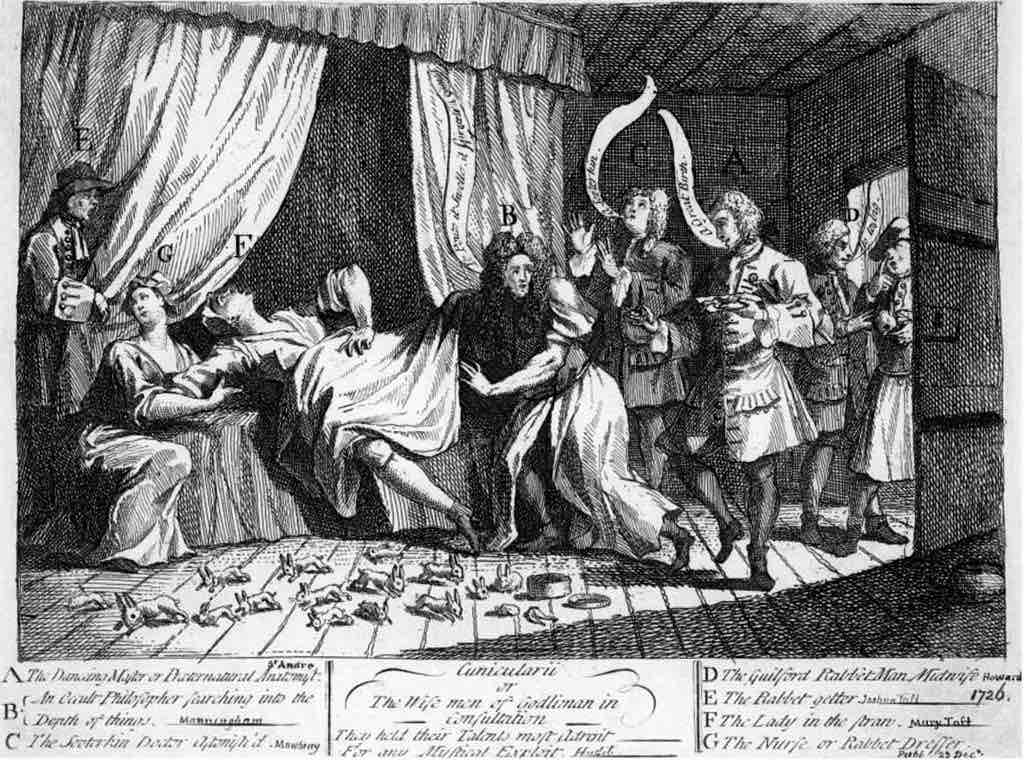 Mary’s explanation for the rabbits was simple. She was weeding the garden when rabbits bounced by her. After that, she developed an incredible taste for all things rabbit: rabbit stew, rabbit meat, fur, etc. This lead her to believe that the rabbits took over her reproductive organs and lead to her new baby rabbits.

This wasn’t so strange at the time which is why she also described her cat-birth to be from her imagination. Science and medicine were in their infancy, especially surrounding women’s health, and maternal impressions which was the belief that human traits could be caused by dreams a mother had or things she interacted with throughout the day.

By November she seemed to be giving birth to a rabbit a day which got the attention of King George I. The King’s interest is what actually drove the scientific community to take this somewhat serious.

King George appointed Swiss doctor Nathaniel St. André and the secretary to the Prince of Wales, Samuel Molyneaux, to investigate. Apparently, when these men got involved Mary was in the middle of giving birth to her fifteenth rabbit (it should be noted that the number of rabbits given birth to change from source to source).

St. André thought it was odd that Mary didn’t seem to have the symptoms other women did in childbirth. He wrote that: “she laugh’d very heartily with us.” Instead of being alarmed by this, he pickled some of the rabbits to investigate and take back to the king. After this rabbit, Mary was moved from home to be inspected and was promised compensation.

She gave birth to a skinned rabbit that didn’t have placenta or other evidence of human birth. Again, the scientists were still sniffing out the hoax. They thought all of this meant that something preternatural was going on.

Scientists hypothesized that Mary’s Fallopian tubes must have been deformed. St. André took it upon himself to strictly monitor Mary. She gave birth to the lower portion of a male rabbit…but it fit perfectly with the rabbit upper body that she had delivered earlier that day.

Scientists STILL didn’t figure it out when they discovered pellets in the rabbit’s belly.

Finally, investigators figured out that the rabbits appeared to be the age of young rabbits only a few months old, except for the first birth that seemed to be a cat. Still, the Prince of Wales did not think this was a hoax. They took Mary at her word.

Finally, Mary delivered a rabbit pelt without blood. A doctor came in and realized she didn’t quite look pregnant and her pulse was not raising despite having just allegedly given birth. 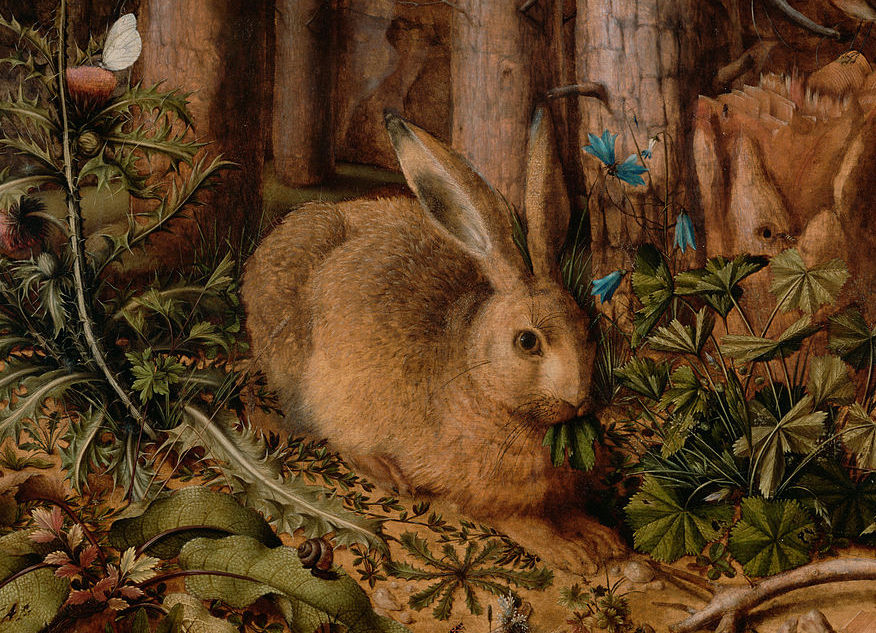 When she was kept under strict surveillance, the entire birthing process stopped. Mary reported some labor pains, but that was it. Soon Baron Thomas Onslow discovered that her husband Joshua Toft was seen visiting rabbit sellers asking for rabbits. Seems suspicious! He told the sellers they could be young, too young for eating, and even dead rabbits would do.

Thomas Howard, the porter at the bathhouse, was caught sneaking a rabbit into Mary’s room. He then confessed that he had been bribed by Mary’s sister to sneak rabbits to her and with this smoking gun Mary’s rabbit-birthing days were over. Two days later, she was told if she didn’t confess the doctors would perform a very painful experiment to inspect her uterus in order to determine what was really happening. With that, she couldn’t risk her life to uphold the hoax.

A publicity stunt that lingers to this day

She finally confessed, but still tried to distance herself from blame. The real story is that Mary had a miscarriage and after that Mary pretended to give birth for – what else? – attention and fame. Joshua and Mary were poor and already had children. She said she did this, “to make so good a living that I should never want again.” Mary claimed that she was pressured to do this from her mother-in-law and that she and her husband were victims of her urging, but who knows for sure.

“Even in the 18th century, tabloid-like news made people rich and famous.”

This was the kind of stunt that made headlines. Even in the 18th century, tabloid-like news made people rich and famous. At this time especially, medical wonders and curiosities made headlines and drew crowds. This would have been the kind of thing they could charge for, but it didn’t work out as they intended. 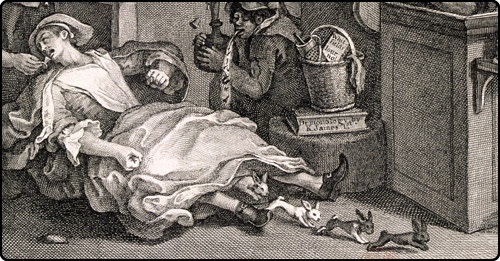 After this scandal, Mary and Joshua disappeared. They lived a quiet life, but they were widely satirized in literature and songs for years. The scientists involved were also completely disgraced with this entire incident leaving a nasty mark on British medicine.

Not only that, but St. André was widely humiliated and recanted his published views on the rabbit incident. In 1729, Samuel Molyneux died of a mysterious poisoning and St. André married his widow. This didn’t help his respect at all. Many of his peers thought that he poisoned Molyneux to marry the widow, so that accusation along with the rabbit hoax permanently ruined his career.

To this day Mary Toft’s story illuminates tabloid culture and the advancements in modern medicine. The doctors so sorely understood women’s anatomy and health that it took them way too long to figure out this obvious trick and Mary’s desperation is something that people feel to this day. Mary did indeed have her fifteen minutes of fame and with that she remains a fascinating footnote in medical history.