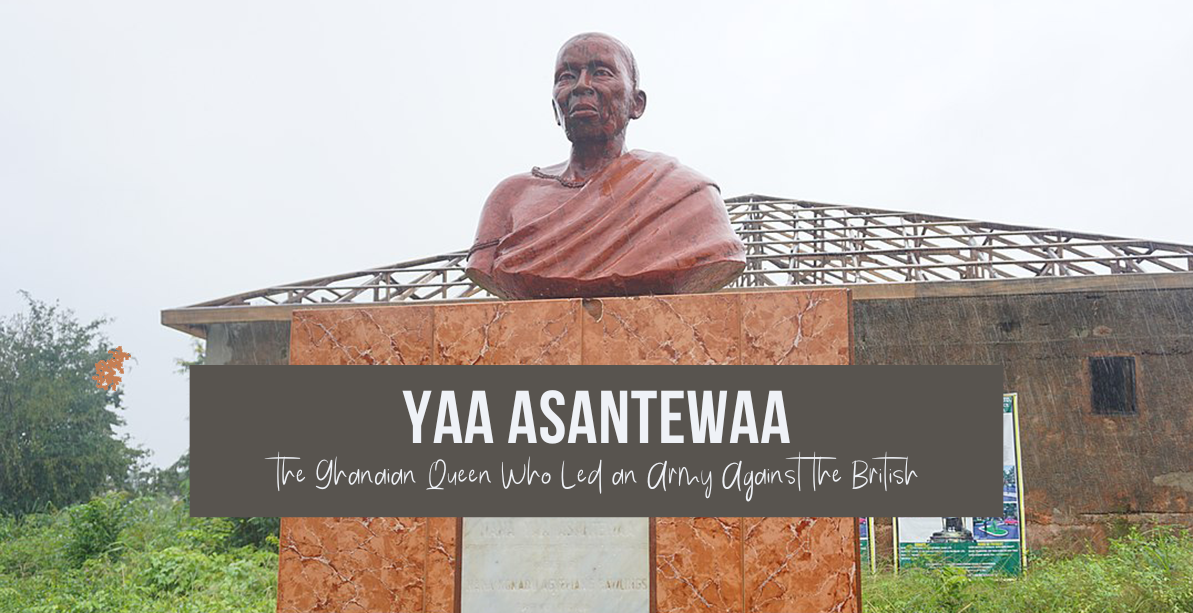 If you’ve seen The Woman King then you know a couple of things.

First, never get your history facts from Hollywood. You know the old Hollywood rule. Never let facts get in the way of a compelling blockbuster. Second, Viola Davis is the greatest ever to do this, and lastly…Africa had some of the most badass women in history and today we’re talking about Yaa Asantewaa – the Ghanaian queen who bravely led her people to war against British forces.

Who was Yaa Asantewaa?

Born in the mid-19th century in the Ashanti Kingdom, a powerful empire located in West Africa on the Gold Coast, in what is now modern-day Ghana, Yaa Asantewaa was a queen mother of the Edweso tribe (I can’t see you but I’ll bet a million dollars you butchered that name horribly).

Around this time the British were all around the world doing what they love to do the most. No…not playing football. Visiting other countries, and taking the land. On these conquests, they left their signature politeness at home – and this is where Yaa Asantewaa got the chance to make her mark.

She had to be amazing beyond a reasonable doubt, sprinkled with a little bit of nepotism and political strategy of course. Yaa Asantewaa checked all those boxes.

She was the daughter of Nana Akwasi Afrane, the chief of Edweso, and the sister of Nana Akwasi Agyeman, the ruler of the Kingdom of Ashanti. Yaa Asantewaa’s badassery was evident right from the beginning. Known for her intelligence, combat, and leadership skills, ever since she was a young woman. She quickly rose through the ranks of the Ashanti court. In the late 1800s, she became the queen mother of Edweso, a position that afforded her a great deal of power and influence within the kingdom.

A warrior and a leader

The Ashanti Kingdom had a long and storied history of resistance against European colonization in the late 1800s. These two forces never missed a chance to pillage and destroy each other in the bloodiest ways they knew how.

In 1900, the British launched a final campaign to defeat the Ashanti and bring it under their control.

The Ashanti people, led by their king, Prempeh I, resisted this effort, and a series of wars ensued between the Ashanti and the British. It was at this time, Yaa Asantewaa emerged as one of the leaders of the Ashanti resistance movement. She and her followers fought bravely against the British.

The battles were bloody and the Ashanti resistance was so strong that even the British who had better weapons continued to take heavy losses.

The Ashantis have a saying – “Wo kum apem, apem beba” which means if you kill a thousand, a thousand more will appear (once again, don’t even bother saying it out loud. You will butcher it very badly).

The British knew they were up against a tough opponent but in true British, the battle was not won until an important historical artifact belonging to the enemy was taken.

She was thirsty for blood and didn’t care whose veins it oozed out of as long as she could protect the identity of her kingdom.

But she had some resistance. The warriors of the kingdom were worried that they might not survive this assault by the British but Yaa Asantewaa was having none of it.

You see, the Golden stool of the Ashanti people is not just a golden chair for the king to sit on. It was not forged by some goldsmith.

The Golden Stool is a sacred object in Ashanti mythology and is believed to have descended from the sky and landed in the lap of the first Ashanti king, Osei Tutu – summoned by Ashanti high priest Okomfo Anokye (you tried to say it aloud again, didn’t you?). It is the source of the Ashanti people’s power and is used in important ceremonies and rituals.

This is why the British needed to capture the Golden Stool. Once the symbol of power is gone, the spirit of the people goes with it.

The Battle of Bekwai was the first major battle of the rebellion, and it took place on March 27, 1900. The Ashanti, led by Yaa Asantewaa and other leaders, fought against a British force led by Major-General Sir Frederick Mitchell Hodgson.

Imagine fighting a war against a guy with a cute name like “Mitchell.”

Despite their bravery, the Ashanti lost the battle and Major-General Hodgson was able to capture the Ashanti capital of Kumasi. The British almost managed to subdue the Ashantis in the Battle of Amoafo.

The Ashanti fought hard but sadly they were outnumbered, outgunned, and they were ultimately defeated in the battle. Yaa Asantewaa and other Ashanti leaders were captured and exiled.

But the one thing the British didn’t capture was The Golden Stool.

The Ashanti who realized they were losing the war decided to hide the Golden Stool in the forest. Losing their lives was a small price to pay for losing the identity of their kingdom.

The stool was later found by some laborers working the land in 1921 and returned to the Ashantis.

Yaa Asantewaa did lose the war but her bravery and heroism will always be remembered by people, especially young women all over Africa. She fought when all odds were against her as a woman, especially at a time when it was not usual for a woman to engage in combat.

She will forever be one of the most badass women in African history and Viola Davis would be great when they eventually make a movie about her.