Let’s just get to it, shall we? 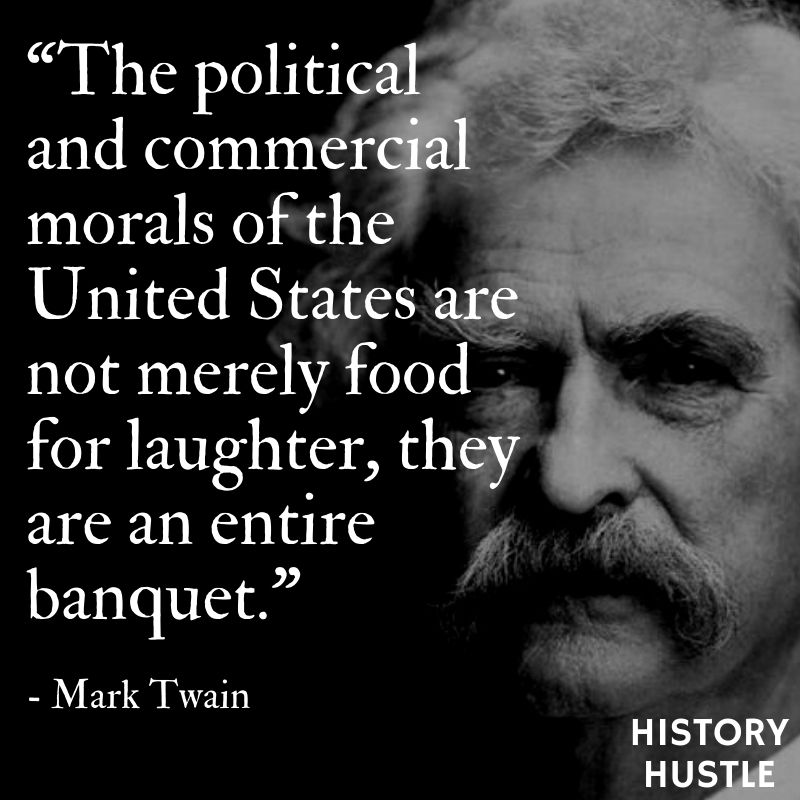 “The political and commercial morals of the United States are not merely food for laughter, they are an entire banquet”.

Mark Twain was apparently not a fan of U.S. politics. I wonder what he’d say now?

2. Mark Twain on some guy’s wife 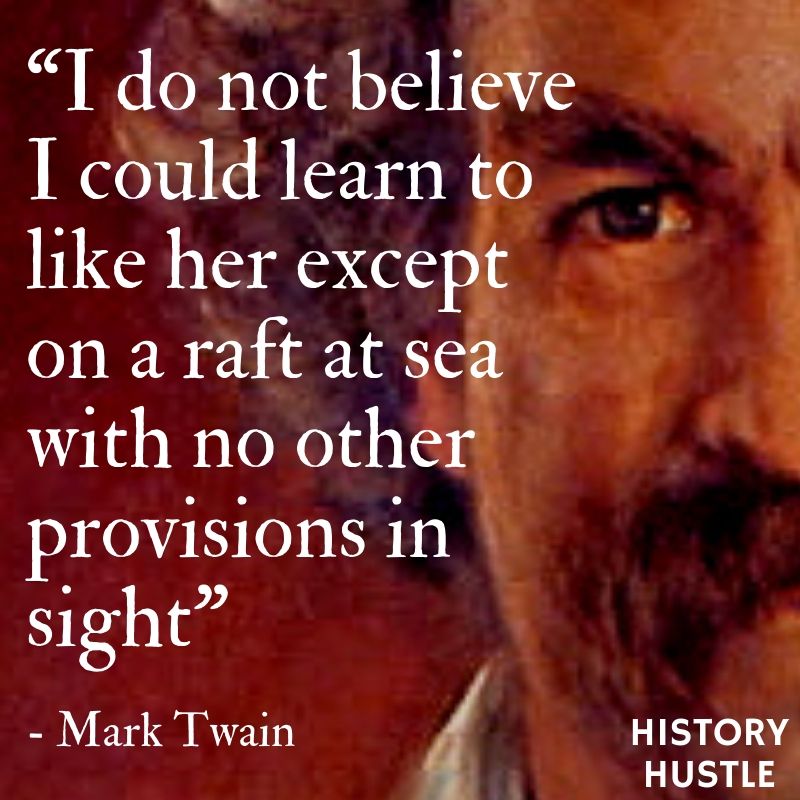 “I do not believe I could learn to like her except on a raft at sea with no other provisions in sight”.

He said this about Lilian Aldrich, wife of poet and novelist Thomas Bailey Aldrich. He called her “strange and vanity-devoured”.

3. Mark Twain on the news 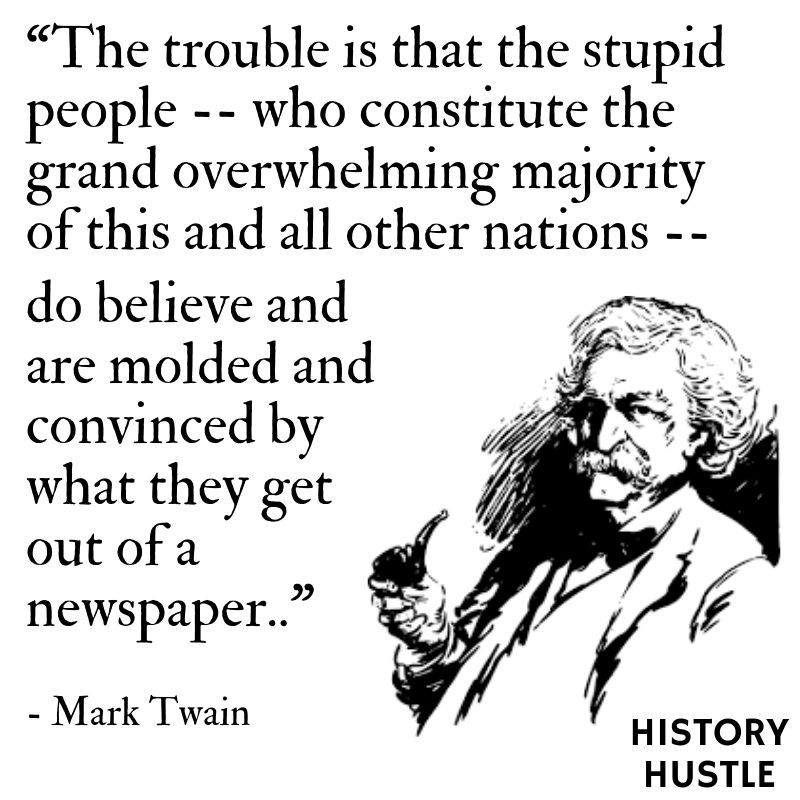 “The trouble is that the stupid people — who constitute the grand overwhelming majority of this and all other nations — do believe and are molded and convinced by what they get out of a newspaper.”

Though he was a publisher, he was not always a huge fan of the press. Or of people, apparently.

4. Mark Twain on a beloved book 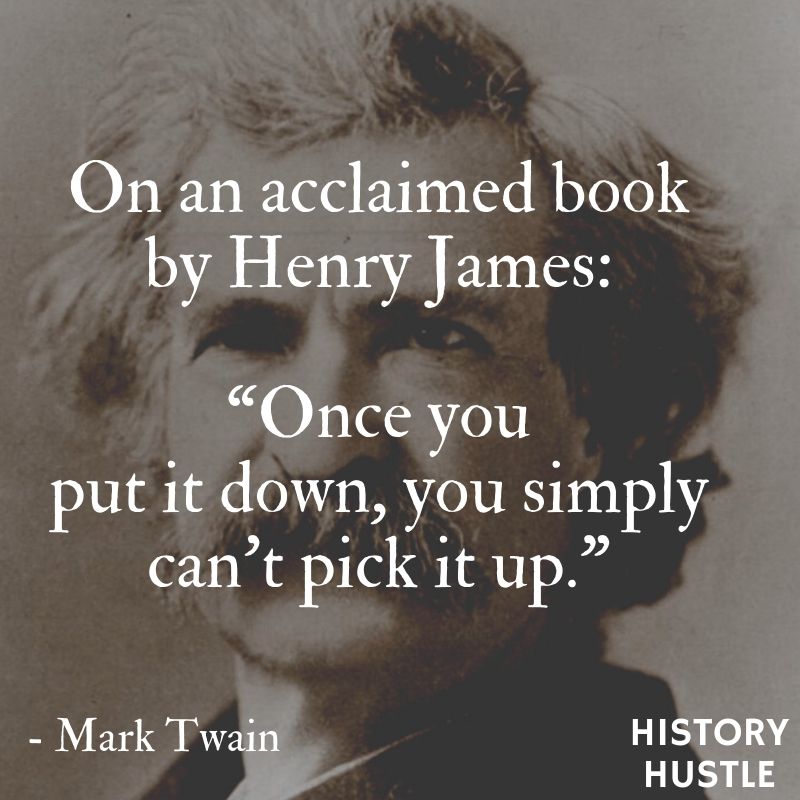 “Once you put it down, you simply can’t pick it up”.

He said this about a beloved book by Henry James. Or was it Jane Austen?. Probably both. 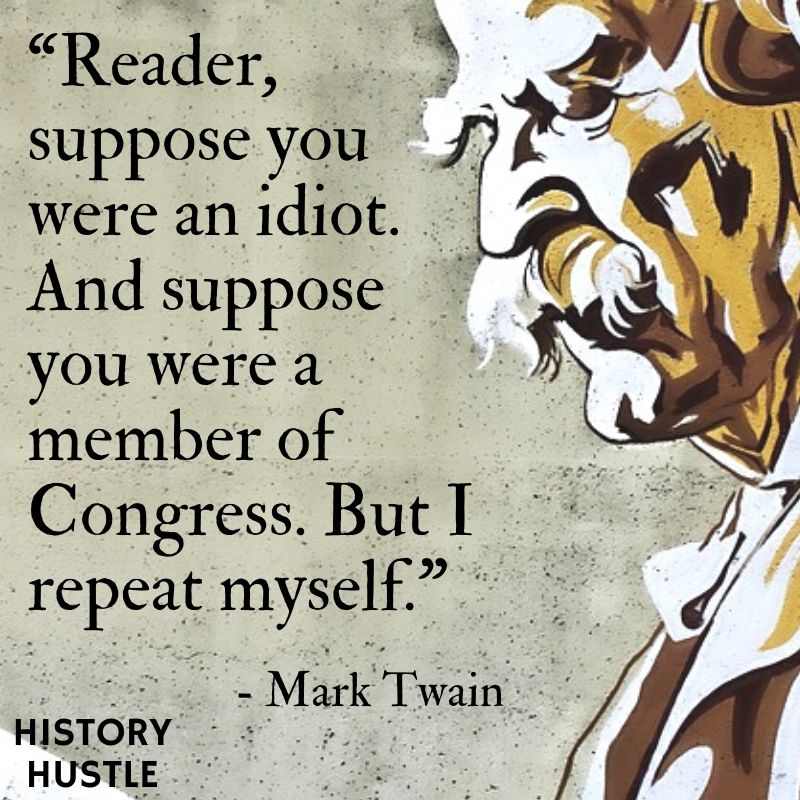 Was he mad about the state of society, and angry at the actions of lawmakers performing bad governance when he said this? Well, yes. But he was mad about the cost of a stamp. 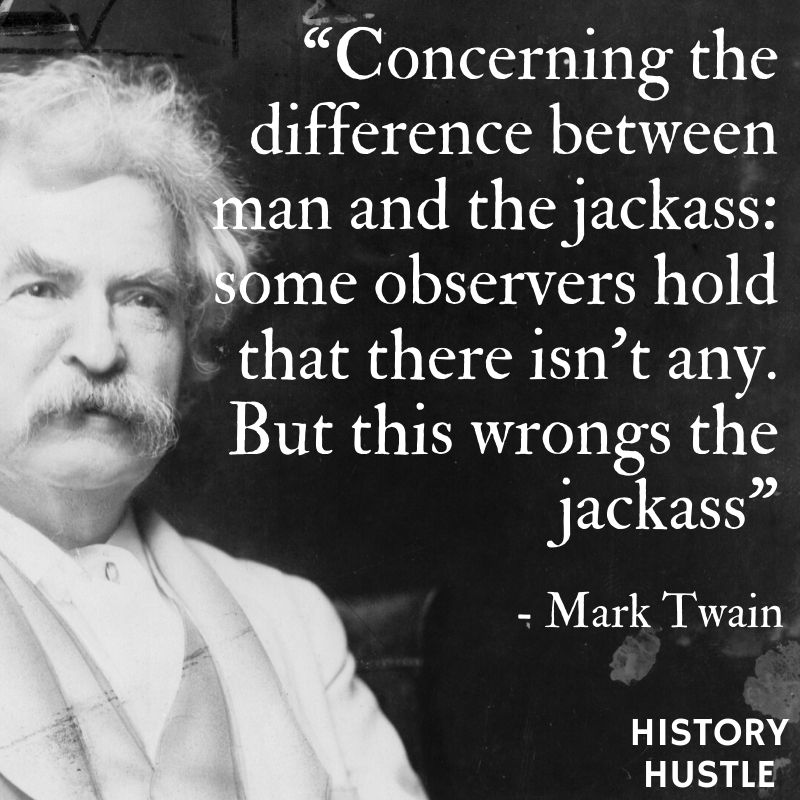 “Concerning the difference between man and the jackass: some observers hold that there isn’t any. But this wrongs the jackass.”

Mark Twain wrote quite a bit about animals. And people. And I think we know where he stands on both. 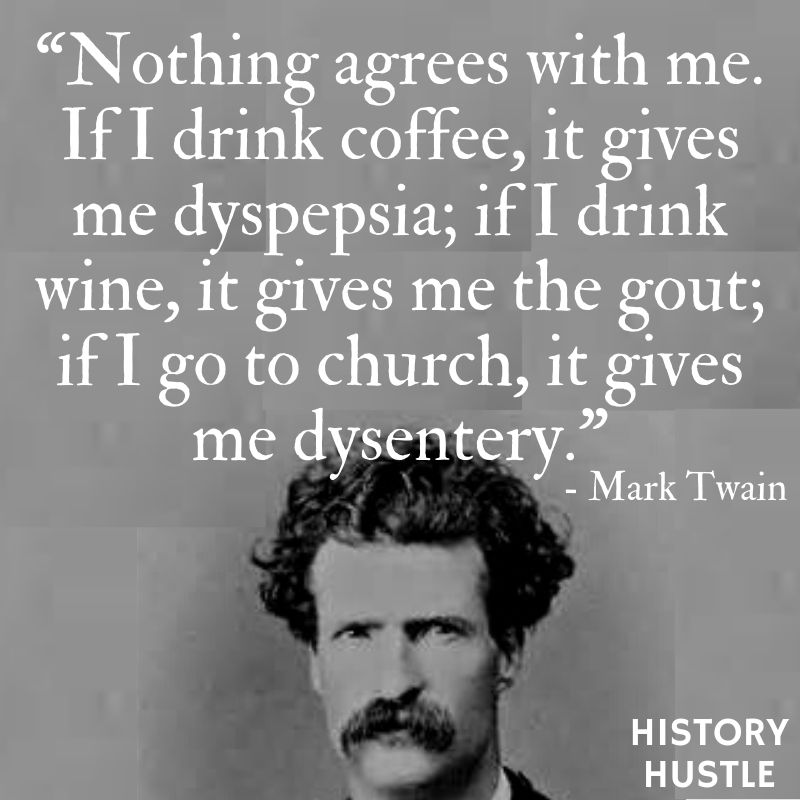 “I like criticism, but it must be my way”.

And it’s funny, coming from the guy who criticized literally everyone.

9. Mark Twain on Jane Austen (so to speak) 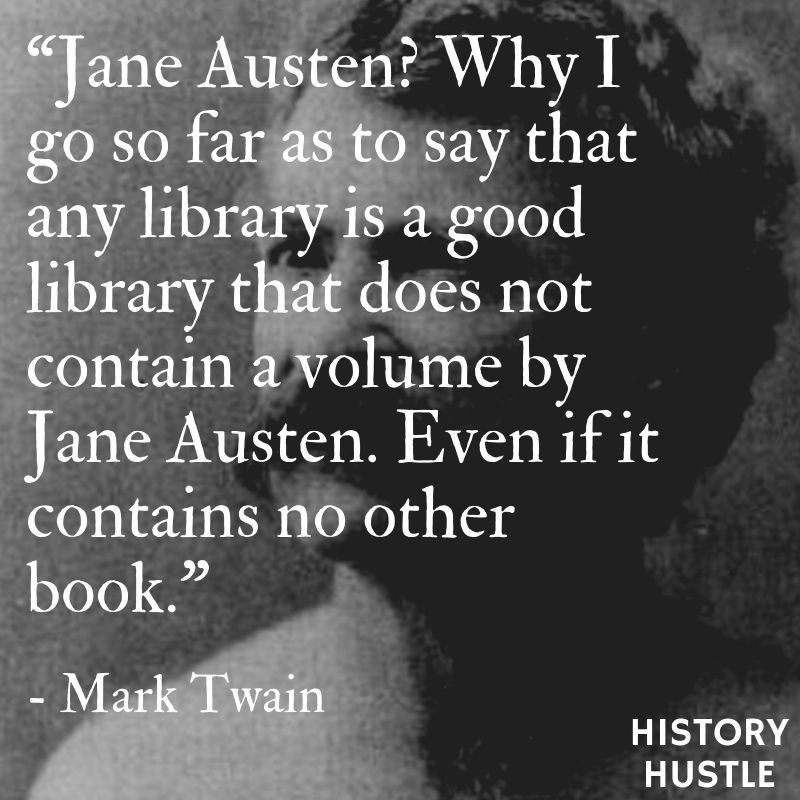 “Jane Austen? Why I go so far as to say that any library is a good library that does not contain a volume by Jane Austen. Even if it contains no other book.”

One of his best zingers about Jane Austen. There are more? Oh yes. Very much so. He kinda hated her, though he apparently read her books over and over. 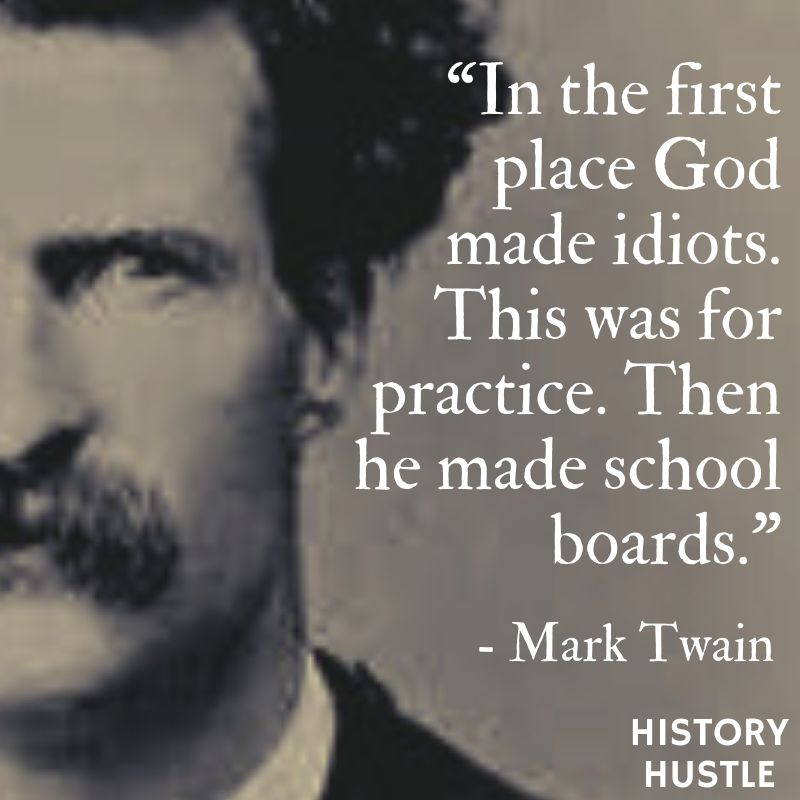 “In the first place God made idiots. This was for practice. Then he made school boards.”

This is from The Tragedy of Pudd’nhead Wilson and appears in Following the Equator, too. Despite the humorous burn, the story actually tackles some serious subject matter.