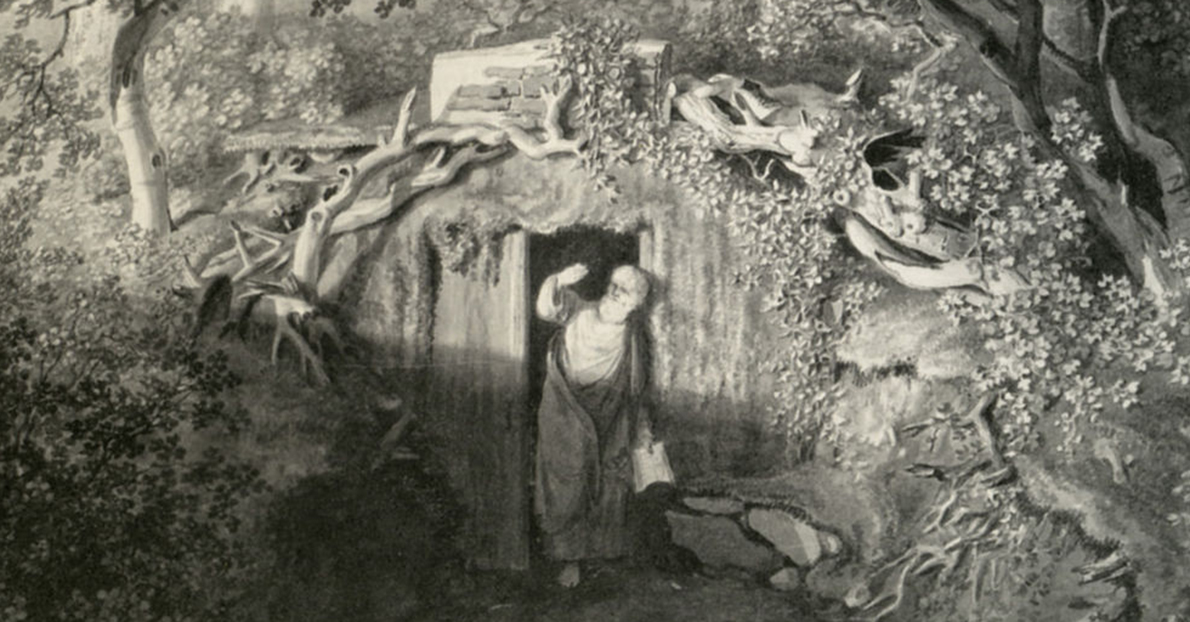 It turns out that the garden gnome that we now use to ornament our garden were once real-life garden hermits. Yes, a real person who lives in a real hermitage, in a real garden. From the 15th to 18th century, wealthy estate owners were not content with just having lavish and perfectly landscaped grounds that looked natural with all the follies, rustic-looking trees, and lakes – there had to be a Garden Hermit that actually lived there.

Garden hermits, also known as ornamental hermits, were people who are hired by rich landowners to live in their estate where they purposely built a hermitage, with follies, grottoes, or rockeries to complete its overall look.

They are expected to permanently live on-site, shun the public life, and basically live in solitude. These ‘hermits’ are encouraged to dress like druids, too. Some would go as far as not bathing, and or trimming their hair and nails.

In return, they were given a stipend, fed, and cared for. They are expected to give advice or counsel, offer entertainment to guests in the form of poetry or the serving of wine. This practice of hiring a real-life garden hermit was mostly found in England but was also seen in Scotland and Ireland.

Professor Gordon Campbell, a professor of Renaissance Studies at the University of Leicester, published the first book about the history of the ornamental hermit in Georgian England. He suggests that Francis of Paola was among the first garden hermits of the 15th century. He lived as a hermit in a cave that is in his own father’s estate.

According to Professor Campbell, the first estate with a well-known hermitage was Château de Gaillon – it’s complete with a small house, chapel, and a garden. He also stated in his book, The Hermit in the Garden: From Imperial Rome to Ornamental Gnome:

“Recruiting a hermit wasn’t always easy. Sometimes they were agricultural workers, and they were dressed in a costume, often in a druid’s costume. There was no agreement on how druids dressed, but in some cases they wore what we would call a dunce’s cap. It’s a most peculiar phenomenon, and understanding it is one of the reasons why I have written this book.”

Recruiting a garden hermit isn’t easy – at least a reliable one. The Honorable Charles Hamilton after acquiring Painshill Park, an estate in Cobham, Surrey, hired a hermit to live there for 7 years. The hermit was not allowed to leave the estate, speak with anyone, or cut his hair. This is in exchange for 700 pounds which is $77,000 in today’s money. Unfortunately, the hired hermit was seen in a local pub just three weeks after getting hired.

Either they could not afford it or they don’t want to deal with a real-life garden hermit, some estate owners opt to set up the hermitage as if its resident had just left or is just out and about. They resort to just staging the hermitage with traditional hermit accessories like an hourglass, book, and glasses.

Needless to say, it’s difficult to find a serious garden hermit. This perhaps contributed to its short-lived popularity. By the end of the 18th century, the practice of hiring ornamental hermit died down. The garden hermit may have not completely left us after all, as seen with the modern-day ornamental gnomes that we now use in our garden.