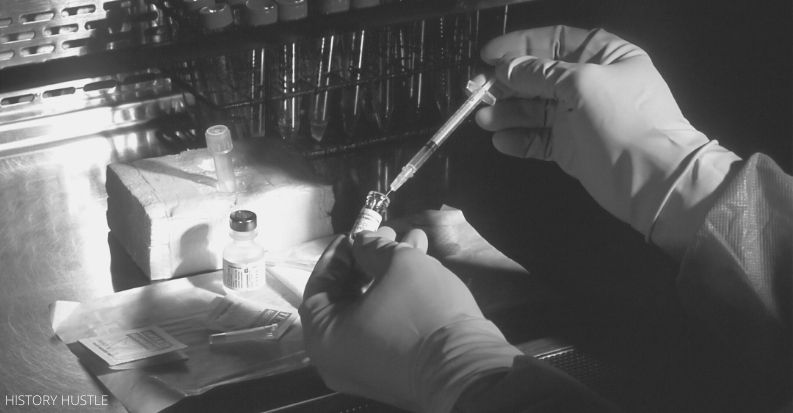 And this is sad because one young man who is at least partly responsible for penicillin’s discovery received no credit. Despite this seeming setback, Dr. Clodomiro Picado Twight, the Costa Rican scientist became one of the world’s foremost authorities on snake venom.

The good doctor, born in San Marcos, Nicaragua, to Clodomiro Picado Lara and Carlota Twight Umaña on April 17, 1887, pioneered the use of antivenin to save people bitten by Central America’s many venomous snakes. Over the course of his life, Dr. Picado wrote at least 115 research papers that delved into virtually everything that intrigued him: soil science, flora, fauna, human tissues, and, of all things, water. Books and monographs are also included in this impressive list and his work covered an astounding range of topics: bromeliads, zoology, botany, ophidism (snake bite), physiology, phytopathology, industrial microbiology, medical microbiology, and immunology.

His brilliance was noted early on, and after graduating from high school in 1906, young Clodomiro (“Clorito to those who loved him) was granted a scholarship that gave him the chance to study in France, including at the University of The Sorbonne, where he received a diploma in zoology in 1908. After a brief return to Costa Rica in 2010, he left to continue his studies, receiving a diploma in Botany, and was granted the academic rank of Doctor in 1913. That very same year he was admitted to the Pasteur Institute and the Colonial Institute in Paris.

On his return to Costa Rica, he became the director of the Clinical Analysis Laboratory of the San Juan de Dios Hospital in San Jose. It’s here that his career flourished. Not content to stop there, he published Anales del Hospital de San José, a quarterly medical publication in 2015.

The Doctor And The Penicillium.

A year before Fleming published his findings on Penicillin, Clodomiro was busily writing about the anti-bacterial qualities of the Penicillium mushroom. He had, in fact, spent more than a decade researching fungi and their potential for fighting diseases.

But there are twists in this story that complicate things a bit because, on the one hand, some prominent doctors in Costa Rica maintain that he did in fact, discover Penicillin. And while it seems likely that he did sometimes work with the Penicillium genus, some notable physicians in Costa Rica dispute this, and for good reason.

According to José María Gutiérrez, an emeritus professor of the Clodomiro Picado Institute (CPI), the good doctor typically worked with fungi from the genus Saccharomyces, not Penicillium. While Picado successfully treated patients with diseases like typhoid fever, paratyphoid, and pneumonia by using this fungus, he couldn’t really explain how or why Saccharomyces treated these diseases successfully.

“He argues that these preparations generated an immune response that protected against other microorganisms as well, which is why he called it a ‘therapeutic vaccine,’” Gutiérrez says.

There’s still much mystery just how the protection mechanism of the “vaccine therapy” using the Saccharomyces fungus works, but Gutiérrez explains that there’s no evidence that they have any antibiotic effect.

“Already at the time the concept that fungi had an effect on bacteria was used, and various researchers had made observations in this regard, so it seems to me that Picado’s work, although it was very valuable, was not the first to demonstrate the effects of fungi on bacteria,” Gutiérrez notes. Picado did, however, study the effects of Penicillium species, but only on plants.

Being the dedicated intellectual that he was, Clorito hoped to solve the problems Costa Rica was dealing with, and find ways to help his fellow man. This tiny country is the land of the fer-de-lance (terciopelo), the bushmaster (matabuey), and the rain forest hog-nosed pit viper (tamagá), as well as several other species of venomous snakes. Death by snakebite wasn’t unusual among the country’s farmworkers, and at this time there was no cure when such tragedies happen.

But the most tragic part is perhaps this: Farm owners commonly kicked out workers who were bitten by venomous snakes. Picado knew he needed to do something, so he set to work: While he certainly focused on healing the wounded, he also began importing antivenom from the Butantan Institute in Brazil. He wanted to make sure his own hospital had a “serum bank,” and he wanted to study snakes and their venom so that Costa Rica could produce its own antivenom.

Clorito also became socially and politically active, helping to develop and promote the “Defense Against Ophidism Act,” legislation that required landowners to keep antivenom serums on hand for treating workers who had been bitten.

So, while he may not have discovered Penicillin, Clorito left an indelible mark in Latin America and is considered the father of herpetology in Costa Rica. His legacy is truly phenomenal.

“Clodomiro Picado’s work constitutes a fundamental point of reference in the development of science in Costa Rica and the region,” Gutiérrez writes in his biography of the renowned scientist. He notes Picado was central to the development of several branches of science in Costa Rica: Immunology, zoology, botany, ecology, medical, industrial microbiology, physiopathology, and agronomy.

“Picado’s main contribution was to have created, under very difficult conditions, a scientific tradition that has lasted until today in our country,” he adds.

But his most influential contributions are undoubtedly the ones that led to a better understanding of how snake bites do their damage. Costa Rica has never had a large population, and when Picado published his book Venomous Snakes of Costa Rica, he reported 13 deaths due to snake bites in just one month. That’s pretty incredible because the population was roughly 500,000. That’s a staggering death rate that’s even higher than the current worldwide death rate from lung cancer.

Now, however, Costa Rica’s population has grown to just over 5 million, but death by snakebite has become negligible, with only one or two deaths per year.

But there’s still more than enough fear of snakes in this small country to go around, and without a doubt, the terciopelo is the most feared of all the 23 species of deadly snakes in Costa Rica.

And for good reason. The snake’s range extends from Mexico to Peru. It is a notoriously bad-tempered snake that will strike at a moment’s notice. When it does, the snake injects a tremendous amount of venom, around ten times the amount of a copperhead.

For those bitten (like my sweet dog Winnie, who was struck twice and didn’t survive) the experience quickly becomes hellish. The venom works by destroying the flesh around the bite. Severe swelling, tissue death, and horrendous pain soon follow. Traveling through the body, the venom induces internal bleeding, and in the worst cases, organ failure and death. Blood seeps out of the victim’s nose and mouth and any other orifices, something that the Mayans referred to as sweating blood.

Clorito himself described the final stages in this way:

“If we ask the wretch something he may still see us with misted eyes, but we get no answer, and perhaps the last sweat of red pearls or a mouthful of blackened blood warns us of the triumph of death.”

It’s down to this remarkable man that so many more people all across the world are now surviving snake bites. The Instituto Clodomiro Picado, founded in his name in 1970, is now one of the world’s leading manufacturers of snake antivenoms. It’s also the only such agency in Central America.

On a global level, snakes still kill about 100,000 people each year. Most of these deaths occur in South Asia, Southeastern Asia, and sub-Saharan Africa. In the impoverished parts of these regions, the capacity to produce antivenin is non-existent so the ICP steps in to fill the gaps. And of course, Costa Rica is now well-stocked with antivenom, but the agency has also supplied or developed life-saving antivenoms for victims on four continents.

So we can be glad that Picado dedicated his life to helping his fellow man. It’s largely due to him that we now know why and how snake bites do their damage. This beloved, pioneering doctor became widely respected and as a result, he was declared “Benemérito de la Patria” (well-deserved of the fatherland.) He was awarded this in 1943, the year before he died from a short illness.

Clorito was also featured on the country’s 2000 colon note for a time and has even had his very own venomous snake named after him (Atropoides picadoi, or Picado’s jumping pit viper).

So even though he may not have discovered penicillin’s usefulness for humans, he did something equally awesome, and now the agency that bears his legacy is saving the world one snakebite at a time.