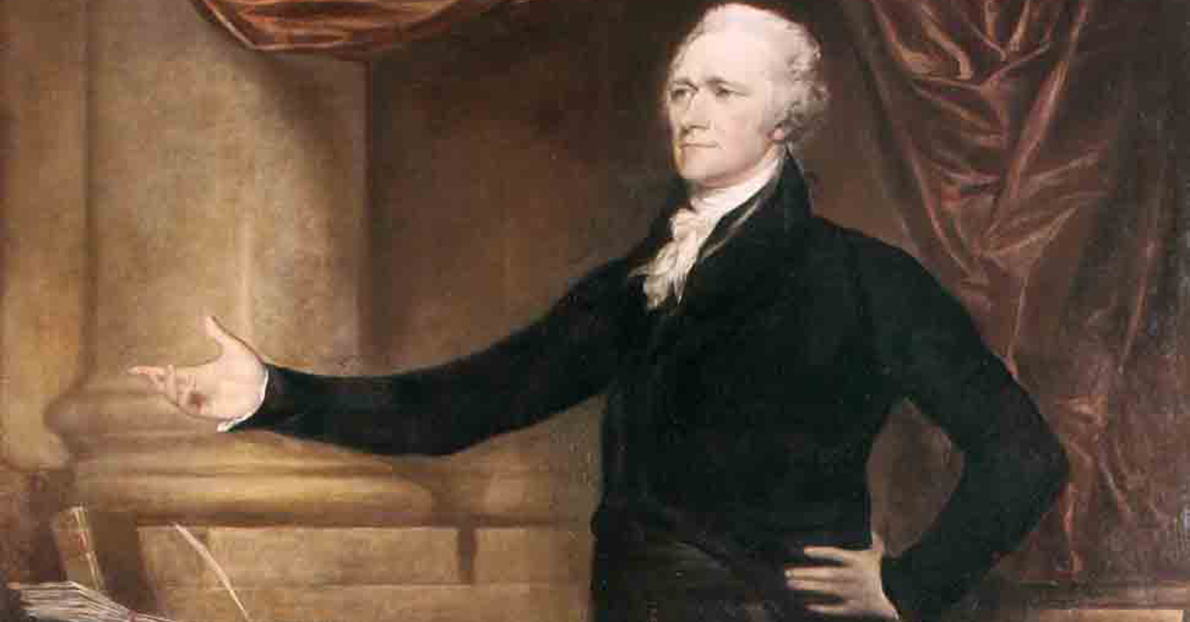 If you didn’t know who Alexander Hamilton was before 2015, you probably do now. After Lin-Manuel Miranda released his hit musical, theatre fans and non-historians alike now know more about our first Secretary of the Treasury than we ever did before.

Before 2015, many of us probably looked at the U.S. 10-dollar bill and never gave him a thought, or maybe said “Who’s this guy and why is he on our money?” Can you tell I’m a huge fan of the musical? Ok, onto better things! Let’s check out some interesting facts you may not have (or may have, depending on your historical background) known about Alexander Hamilton.

1. Hamilton is Not from the United States

Hamilton was born on January 11, (his birth year is disputed as either 1755 or 1757) on the island of Nevis in the British West Indies, otherwise known as in the Caribbean. After his mother died and his father had left long ago, he left for New York as a teenager.

2. Hamilton was a Revolutionary War Veteran

Hamilton is actually considered a war hero for his efforts during the war. George Washington reached out to Alexander personally to become his right-hand man, otherwise known as his aide de camp.

During the Battle of Yorktowne, he led a charged attack with the aid of his friends on a British redoubt. With that knowledge, you could say he was a key component in the United States gaining independence.

3. He Lied About His Age

The reason historians debate about when Hamilton was born is because early on he lied about how old he was. Shortly after he was born, his Scottish father James Hamilton left him, his brother, and his mother. The family was left in poverty and his mother, Rachel Fawcett, died when he was 13 after becoming sick.

Needing to work, he changed his age to look more promising as an apprentice and got a job as a clerk with a trading company in St. Croix.

That certainly helped him, since after he wrote a letter he was going to send to his father, it was published instead in a newspaper by editor Hugh Knox (yes, the same Knox who was ordained by Aaron Burr Sr.). After it was published, many businessmen came forward to ask the identity of the person who wrote the letter. Well, the rest is history since that collection is what sent Hamilton to America to get an education at King’s College (now Columbia University).

4. He was Mostly a Self-Taught Lawyer Who Graduated in Six Months

Today, that’s completely unheard of. Lawyers go through years and years of exams and training, but Hamilton did it in record time. While living in the Caribbean, he read law book after law book and studied law at King’s College.

His studies, however, were interrupted by the impending war with Britain. After the war, he left his post as Washington’s adviser and finished up his studies. It took him only 6 months to prepare for the New York Bar Exam and he passed with flying colors.

In 1782, after he passed the exam, Hamilton became a lawyer in New York City. And as the musical says: “I practiced law, Burr worked next door.” But we’ll get to more about Aaron Burr later. On a side note, he also studied with John Jay and William Paterson. If you don’t know who they are, they became two future Supreme Court Justices.

5. One of His Legacies was The Federalist Papers

If you remember anything from American history, one of the things maybe the Federalist Papers. What were these papers? Well, these papers helped ratify the Constitution. At the time, the United States Constitution wasn’t well received. It was a mess and contradictory.

Along with John Jay and James Madison, they developed a plan to write 25 essays to newspapers to anomalously defend the Constitution, about 9 essays each. Well, that didn’t work out as planned.

In the end, 85 essays were written between October 1787 and May 1788. John Jay became ill and only wrote 5 essays. James Madison wrote 29, and Hamilton wrote the other 51. He really does write like he’s running out of time, doesn’t he? Thanks to their efforts, the Constitution became ratified on June 21, 1788, after 9 of 13 states approved it.

6. Hamilton was Involved in the United States’ First Sex Scandal

When it comes to 2020, a sex scandal isn’t all that shocking (sometimes) and you know, it’s been done throughout history. Hell, look at Bill Clinton. But this scandal was a little different. While Hamilton’s wife and children were on vacation with her family in upstate New York, Hamilton decided to stay behind because he had too much work to do.

He had a plan to get through to Congress after all. He was beaten, tired, and in need of a break. Well, one night a Maria Reynolds came to his door looking for help. She had said her husband, James Reynolds, abandoned her and she was in need of money to get to some family to stay with. Hamilton walked her home and gave her the money, and somehow they both ended up in her bedroom.

Next thing you know, Hamilton is having an extramarital affair for a few months. It wasn’t what everyone thought though. This blew into such huge proportions it made Hamilton write the Reynolds Pamphlet which cleared him of a national financial scam, but also exposed his infidelity. If he didn’t decide to piss off Thomas Jefferson, the whole thing would’ve probably remained a secret.

The newspaper wasn’t as we all know it today. During the 1800 election, Hamilton was angry that Thomas Jefferson was the Democratic-Republican candidate. He wanted then-President John Adams to win for the Federalist Party since Adams aligned more with his ideals. Well, we all know who won. In November 1801, Hamilton decided to create The New York Evening Post, which was anti-Democratic-Republican and consistently slandered Jefferson.

Today, we know the paper like The New York Post, which isn’t as reputable as a news source anymore. The paper was purchased by Rupert Murdoch in 1976 and it’s only gone downhill from there. Sadly we’ll never know how Hamilton would have felt about his beloved paper and the content they print today.

8. His Son Was Killed in a Duel

Philip Hamilton was killed in a duel long before his father. But that’s not the interesting part, or maybe it is. On July 4th, 1801, a lawyer named George Eacker gave a speech at Columbia University about Hamilton trying to take the presidency by force and preferred monarchy over democracy. Philip read about the speech in the newspaper and quite aptly, became angry his father’s name was being slandered with lies. Four months later, he and his friend Richard Price spotted Eacker in a box at the theatre. Well, Price and Hamilton supposedly drunk stormed the box to confront Eacker and insult him. Two wrongs don’t make a right…right?

Later, both Price and Philip sent a letter to Eacker challenging him to a duel. Two duels? Well, November 22nd, 1801 was the duel with Price. Both men missed their shot and honor was satisfied. The next day it was Philip’s turn. They met at the dueling grounds in Weehawken, New Jersey, and sadly, Philip was struck and died a day later, mostly due to infection. Here’s the kicker: the same place Philip died is where Hamilton chose his duel and died three years later.

9. He Left His Family in Debt

What? THE Alexander Hamilton, a Founding Father, first Secretary of the Treasury, and a genius left his family in debt? It’s inconceivable! Ok, wrong story. After his death, James Madison and Thomas Jefferson started a rumor that Hamilton was corrupt and used his position as Secretary of the Treasury to make himself wealthy. Well, none of it was true. Hamilton never cheated the system and wasn’t corrupt. He created America’s economic infrastructure and Wall St…well, it’s hard to see that as a good thing right about now.

Serving as Secretary, he actually made less money than during his time as a lawyer. He may have even made more money if he wasn’t killed. Things got so bad for the Hamilton family is caused Eliza, his wife, to ask Congress for money and land that was given to him for his service in the Revolutionary War that he previously forfeited. Things eventually get better though. Eliza helped raise funds for the Washington Monument and started her own private orphanage in New York City.

10. No One Knows What Really Happened

What does that mean? It means there are aspects of Hamilton’s dealings and life that no one knows for sure about. For a man who was constantly writing, there are still things left to ambiguity. A private dinner meeting between Hamilton, Jefferson, and Madison occurred but we only have evidence of Jefferson’s account.

All we know is, the meeting led to the nation’s capital (Washington, D.C.) being placed in the South along the Potomac River, and Hamilton got his votes for his financial system passed through Congress. Yes, the same system we have today.

What’s the next one? No one knows the full account of Hamilton’s death. The only witnesses were their seconds, which are basically neutral parties to negotiate terms between the two dueling parties. Did Hamilton purposely misfire? Did the dueling code obligate Burr not to shoot? Well if that was the case Hamilton wouldn’t have died. All we know is yes, both parties fired in succession but the seconds disagree on the intervening time. So, it’s a case of Han Solo vs. Greedo and who shot first. We’ll just never know.