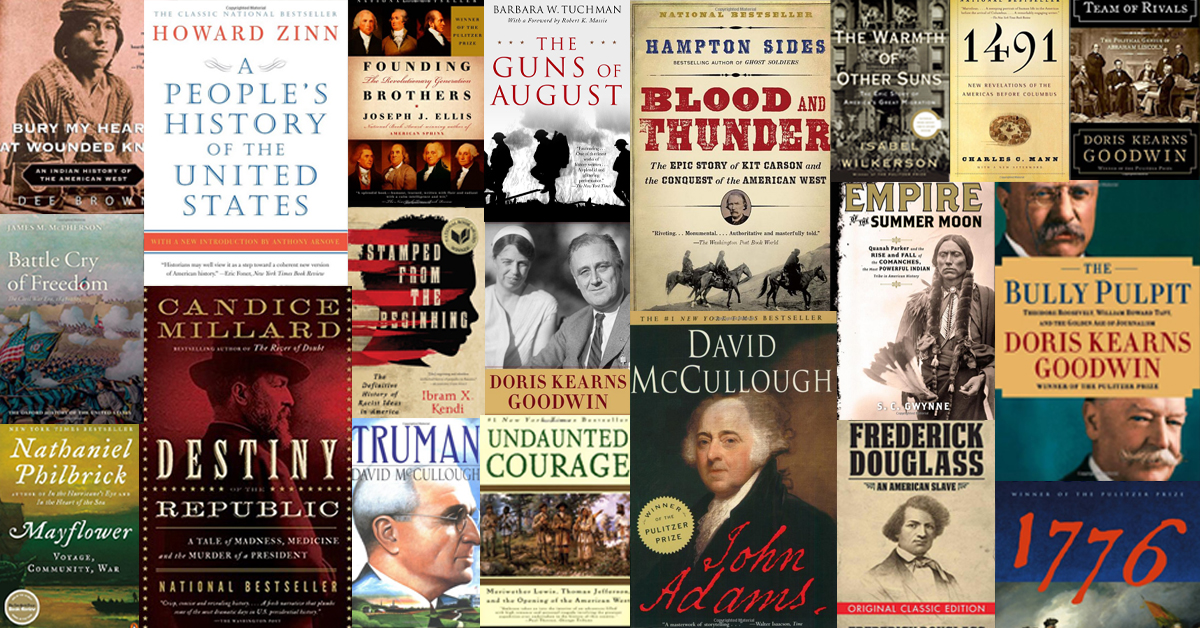 The books on this list are considered some of the most essential and best books on American history.

NOTE: As an Amazon Associate we earn from qualifying purchases.

1. A People’s History of the United States by Howard Zinn

“Known for its lively, clear prose as well as its scholarly research, it is the only volume to tell America’s story from the point of view of—and in the words of—America’s women, factory workers, African-Americans, Native Americans, the working poor, and immigrant laborers.”

“It is the story of Americans in the ranks, men of every shape, size, and color, farmers, schoolteachers, shoemakers, no-accounts, and mere boys turned soldiers. And it is the story of the King’s men, the British commander, William Howe, and his highly disciplined redcoats who looked on their rebel foes with contempt and fought with a valor too little known.”

3. Empire of the Summer Moon by S. C. Gwynne

“The war with the Comanches lasted four decades, in effect holding up the development of the new American nation. Gwynne’s exhilarating account delivers a sweeping narrative that encompasses Spanish colonialism, the Civil War, the destruction of the buffalo herds, and the arrival of the railroads, and the amazing story of Cynthia Ann Parker and her son Quanah—a historical feast for anyone interested in how the United States came into being.”

“Ellis argues that the checks and balances that permitted the infant American republic to endure were not primarily legal, constitutional, or institutional, but intensely personal, rooted in the dynamic interaction of leaders with quite different visions and values. Revisiting the old-fashioned idea that character matters, Founding Brothers informs our understanding of American politics–then and now–and gives us a new perspective on the unpredictable forces that shape history.”

5. Team of Rivals: The Political Genius of Abraham Lincoln by Doris Kearns Goodwin

“We view the long, horrifying struggle from the vantage of the White House as Lincoln copes with incompetent generals, hostile congressmen, and his raucous cabinet. He overcomes these obstacles by winning the respect of his former competitors, and in the case of Seward, finds a loyal and crucial friend to see him through. This brilliant multiple biography is centered on Lincoln’s mastery of men and how it shaped the most significant presidency in the nation’s history.”

“With an extraordinary collection of details, Goodwin masterfully weaves together a striking number of story lines—Eleanor and Franklin’s marriage and remarkable partnership, Eleanor’s life as First Lady, and FDR’s White House and its impact on America as well as on a world at war. Goodwin effectively melds these details and stories into an unforgettable and intimate portrait of Eleanor and Franklin Roosevelt and of the time during which a new, modern America was born.”

7. Stamped from the Beginning: The Definitive History of Racist Ideas in America by Ibram X. Kendi

“In this deeply researched and fast-moving narrative, Kendi chronicles the entire story of anti-Black racist ideas and their staggering power over the course of American history. Stamped from the Beginning uses the life stories of five major American intellectuals to offer a window into the contentious debates between assimilationists and segregationists and between racists and antiracists.”

8. The Warmth of Other Suns: The Epic Story of America’s Great Migration by Isabel Wilkerson

“In this beautifully written masterwork, Pulitzer Prize–winning author Isabel Wilkerson chronicles one of the great untold stories of American history: the decades-long migration of black citizens who fled the South for northern and western cities, in search of a better life. From 1915 to 1970, this exodus of almost six million people changed the face of America.”

“Particularly notable are McPherson’s new views on such matters as the slavery expansion issue in the 1850s, the origins of the Republican Party, the causes of secession, internal dissent and anti-war opposition in the North and the South, and the reasons for the Union’s victory.”

10. Bury My Heart at Wounded Knee: An Indian History of the American West by Dee Brown

“Using council records, autobiographies, and firsthand descriptions, Brown introduces readers to great chiefs and warriors of the Dakota, Ute, Sioux, Cheyenne, and other tribes, revealing in heart wrenching detail the battles, massacres, and broken treaties that methodically stripped them of freedom. A forceful narrative still discussed today as revelatory and controversial, Bury My Heart at Wounded Knee permanently altered our understanding of how the American West came to be defined.

“The story is told through the intense friendship of Theodore Roosevelt and William Howard Taft—a close relationship that strengthens both men before it ruptures in 1912, when they engage in a brutal fight for the presidential nomination that divides their wives, their children, and their closest friends, while crippling the progressive wing of the Republican Party, causing Democrat Woodrow Wilson to be elected, and changing the country’s history.”

“In this, the first and most frequently read of his three autobiographies, Douglass provides graphic descriptions of his childhood and horrifying experiences as a slave as well as a harrowing record of his dramatic escape to the North and eventual freedom. Published in 1845 to quell doubts about his origins — since few slaves of that period could write — the Narrative is admired today for its extraordinary passion, sensitive and vivid descriptions and storytelling power.

13. The Guns of August by Barbara W. Tuchman

“In this landmark, Pulitzer Prize–winning account, renowned historian Barbara W. Tuchman re-creates the first month of World War I: thirty days in the summer of 1914 that determined the course of the conflict, the century, and ultimately our present world. Beginning with the funeral of Edward VII, Tuchman traces each step that led to the inevitable clash. And inevitable it was, with all sides plotting their war for a generation.”

14. 1491: New Revelations of the Americas Before Columbus by Charles C. Mann

“Contrary to what so many Americans learn in school, the pre-Columbian Indians were not sparsely settled in a pristine wilderness; rather, there were huge numbers of Indians who actively molded and influenced the land around them. The astonishing Aztec capital of Tenochtitlan had running water and immaculately clean streets, and was larger than any contemporary European city. Mexican cultures created corn in a specialized breeding process that it has been called man’s first feat of genetic engineering.”

15. Undaunted Courage: Meriwether Lewis, Thomas Jefferson, and the Opening of the American West by Stephen Ambrose

“Ambrose has pieced together previously unknown information about weather, terrain, and medical knowledge at the time to provide a vivid backdrop for the expedition. Lewis is supported by a rich variety of colorful characters, first of all Jefferson himself, whose interest in exploring and acquiring the American West went back thirty years. Next comes Clark, a rugged frontiersman whose love for Lewis matched Jefferson’s.”

“This is history on a grand scale—a book about politics and war and social issues, but also about human nature, love, religious faith, virtue, ambition, friendship, and betrayal, and the far-reaching consequences of noble ideas. Above all, John Adams is an enthralling, often surprising story of one of the most important and fascinating Americans who ever lived.”

17. Destiny of the Republic: A Tale of Madness, Medicine and the Murder of a President by Candice Millard

“James Abram Garfield was one of the most extraordinary men ever elected president. Born into abject poverty, he rose to become a wunderkind scholar, a Civil War hero, a renowned congressman, and a reluctant presidential candidate who took on the nation’s corrupt political establishment.”

18. Blood and Thunder: The Epic Story of Kit Carson and the Conquest of the American West by Hampton Sides

“At the center of this sweeping tale is Kit Carson, the trapper, scout, and soldier whose adventures made him a legend. Sides shows us how this illiterate mountain man understood and respected the Western tribes better than any other American, yet willingly followed orders that would ultimately devastate the Navajo nation. Rich in detail and spanning more than three decades, this is an essential addition to our understanding of how the West was really won.”

“The last president to serve as a living link between the nineteenth and the twentieth centuries, Truman’s story spans the raw world of the Missouri frontier, World War I, the powerful Pendergast machine of Kansas City, the legendary Whistle-Stop Campaign of 1948, and the decisions to drop the atomic bomb, confront Stalin at Potsdam, send troops to Korea, and fire General MacArthur.”

“As Philbrick reveals in this electrifying history of the Pilgrims, the story of Plymouth Colony was a fifty-five year epic that began in peril and ended in war. New England erupted into a bloody conflict that nearly wiped out the English colonists and natives alike. These events shaped the existing communities and the country that would grow from them.”

For the best books in WWII History see our list here.