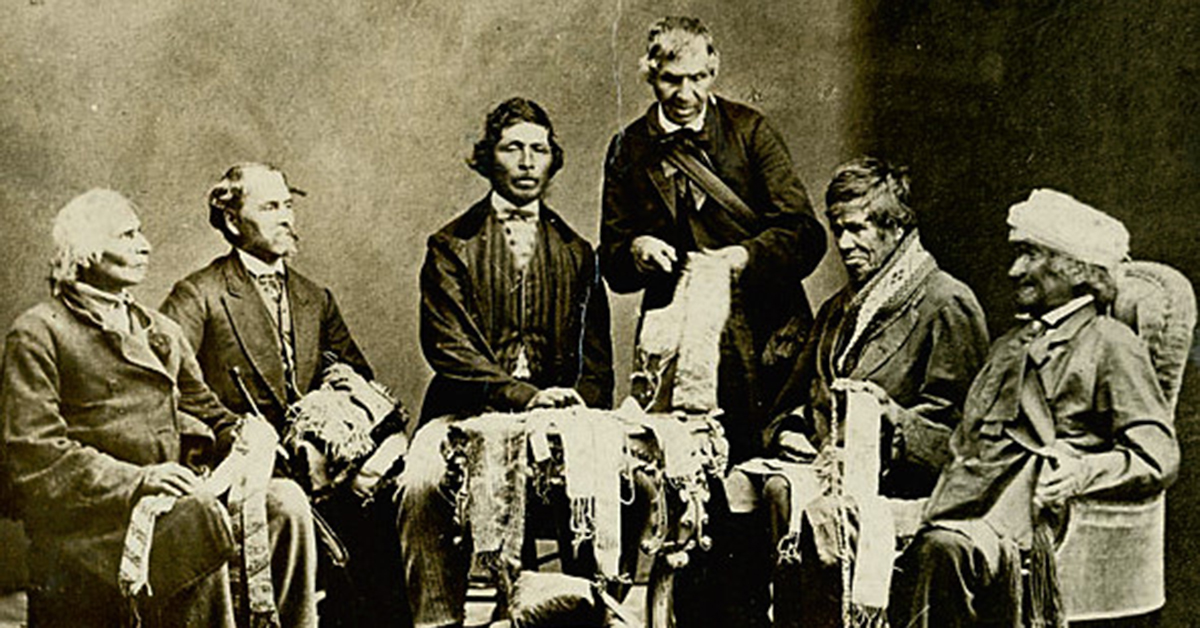 The Sachems were voted to their political positions by their designated Clan Mothers, the matrilineal hereditary leaders

After a failed rebellion against the Algonquin, the rebel factions fled to modern-day upstate New York. Within those factions were the people who would become the powerful Iroquois Confederation.

Years after their move down south, around 1450, a great prophet named The Peacemaker brought the 5 warring Nations that came from the rebellion together and formed the Confederation. A government that consisted of 5 primary nations: The Mohawk, the Seneca, the Onondaga, the Oneida, and the Cayuga. All United by a common culture; a culture identified by their name, Haudenosaunee, meaning “people of the longhouse.”

Our history books don’t often talk about the Haudenosaunee, unfortunately. Despite their uniqueness and outstanding accomplishments, history’s selective camera is typically zoomed in on European colonists.

An empire built on beavers

During the 17th and 18th centuries, beavers were everything to European fur traders. Their pelts were highly sought after back home, making them a valuable resource to the powerful merchant companies that sold them.

The Haudenosaunee controlled much of the land that the beavers lived on—but not all of it. Other tribes held valuable beaver lands as well. The European’s used these tribes as suppliers to create a massive fur trade back in the Old World, making the institutions running the operations very desperate for as much product as they could get. The Haudenosaunee realized they could monopolize their commodity business and, with their Dutch and English trading partners, conquer their fellow Beaver trading neighbors.

During this beaver induced conquest, the Iroquois claimed an empire ranging from parts of Canada down to the modern-day southwest border of Kentucky. They defeated several different tribes, including the group they rebelled against long ago, the Algonquins.

The Haudenosaunee’s dominance would continue as they helped the English drive out the French from most of North America, creating an Empire built on beavers.

When the 5 nations needed to make a critical decision, such as going to war, they would decide via the Grand Council. Representatives of each clan called Sachems conducted the council meetings themselves.

The Sachems were voted to their political positions by their designated Clan Mothers, the matrilineal hereditary leaders of their nations, and were perceived by the Haudenosaunee as sacred leaders. Women were seen as almost divine beings, albeit for practical reasons that aided their society’s survival.

The woman in Haudenosaunee civilization could grow and harvest crops and give birth to new generations, thus intertwining their powers with the concept of Mother Nature.

In Haudenosaunee mythology, the creation story revolves around a goddess called the Sky Woman; Telling a story of how the Clan Woman is the rightful rulers of the People.

Although the chiefs held most of the political power and day to day governance, the Clan Mother possessed the power to dismiss the chief if she and other Mothers felt he was doing a poor job.

Chiefs handled civic matters, others took care of military operations, and Sachems acted as a Congress to vote on decisions for the Confederacy at the councils. Making the chiefs and sachems more akin to elected officials and not the monarchal leaders we often associate with today in indigenous culture.

When the 5 nations first unified under The Peacemaker, they needed a way to govern themselves without civil war breaking out. If you know history, civil wars are about as common as the Starbucks on every street corner.

Despite having 5 different groups of people, they never had a civil war, not one.

Their stability had everything to do with how they were structured as a collective government.

If the 5 nations needed to make a critical decision, such as going to war, they would decide via the Grand Council. Representatives of each clan called Sachems conducted the council meetings themselves.

To balance power between nations, since the Mohawk and Seneca nations were much larger than the others, the Council had a system in place to make sure no one nation could decide without at least some of the other nations agreeing.

The Haudenosaunee accomplished this feat of fairness by putting any proposal, like deciding to go to war, through a rigorous process of debates and voting. If one nation proposed invading a rival confederacy’s territory, it would first have to agree amongst themselves and reach a consensus within their nation. Once they agreed to invade, the decision would be passed to the next nation. If that second nation, in turn, decided to invade, then the decision would be passed on to the next nation.

Now let’s say the next two nations both say no to the invasion proposal. Even if the two that say no are Mohawk and Seneca, the two most powerful nations, their votes hold the same value as the two smaller nations. If there’s a tie like in our hypothetical scenario, the ultimate decision goes to Onondaga or the FireKeepers.

They were in charge of, well, keeping the fire and being the last voters for the Grand Council. The Onondaga could go either way or choose to start the voting process over again. This system was highly effective at keeping the balance of power at an equal ratio, as evidenced by the fact that the Haudenosaunee still govern themselves using the Grand Council to this day.

But was this government truly the first Democracy in North America?

Since the Sachems (there were only 50) were appointed by one person of power (The Clan Mothers) and not a body of citizens, it’s difficult to call the Haudenosaunee a real democracy. Especially since the Clan Mother could not possibly represent every individual in her family. Not to mention The Clan Mother wasn’t chosen by her family but through hereditary succession.

Some major credit is still due to the Haudenosaunee for creating a genuinely revolutionary government system, beating the founding fathers by centuries to the first government in America that gave its citizens a form of representation. The fact that many Americans are sadly unaware of in these times.

History has largely forgotten the greatness of this powerful Native conglomerate; Neglecting to tell the story of a remarkable civilization that was truly unique in its own right. The Haudenosaunee are at the forefront of Early American History and receive minimal scholarly attention compared to western Judeo-Christian subjects.

This article is simply a concise summary of the Haudenosaunee’s 700 years plus history. There is so much more to learn regarding this incredible civilization.

Sources:
The Great Law and the Longhouse: A Political History of the Iroquois Confederacy (Volume 223) By William N. Fenton circa 2010
League of the Ho-Dé-No-Sau-Nee or Iroquois, Vol. 1 By Lewis Henry Morgan circa 1851
French-Iroquois: Diplomatic and Military Relations 1609-1701 by Robert A. Goldstein circa 1969
https://www.history.com/news/iroquois-confederacy-influence-us-constitution
https://americanindian.si.edu/sites/1/files/pdf/education/HaudenosauneeGuide.pdf