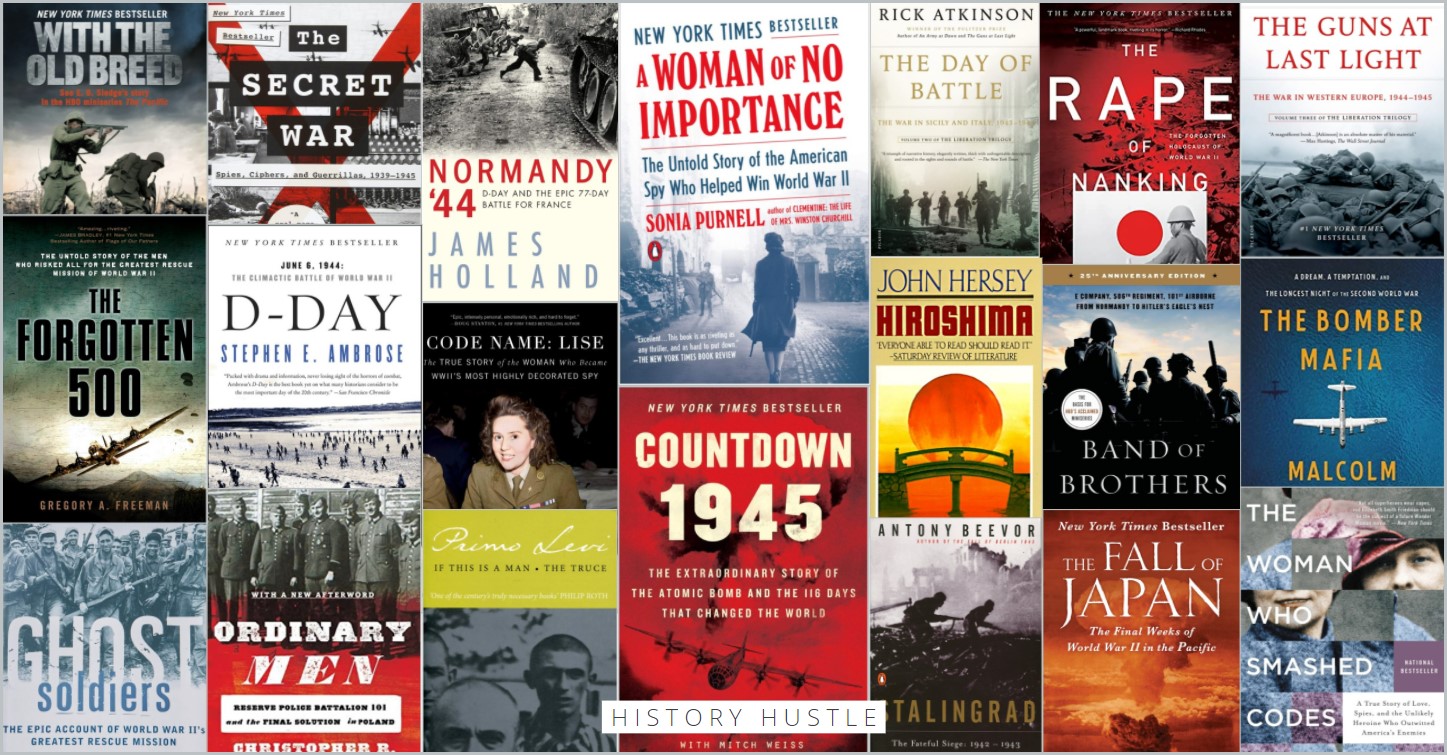 Here’s a list of the 20 best books about WWII history that will give you a noteworthy dose of insight into the most significant period in world history. They’re some of the most fascinating and influential nonfiction books out there.

NOTE: As an Amazon Associate we earn from qualifying purchases.

1. A Woman of No Importance: The Untold Story of the American Spy Who Helped Win World War II by Sonia Purnell

“Based on new and extensive research, Sonia Purnell has for the first time uncovered the full secret life of Virginia Hall–an astounding and inspiring story of heroism, spy craft, resistance, and personal triumph over shocking adversity. A Woman of No Importance is the breathtaking story of how one woman’s fierce persistence helped win the war.”

2. Countdown 1945: The Extraordinary Story of the Atomic Bomb and the 116 Days That Changed the World by Chris Wallace with Mitch Weiss

“But Countdown 1945 is more than a book about the atomic bomb. It’s also an unforgettable account of the lives of ordinary American and Japanese civilians in wartime—from “Calutron Girls” like Ruth Sisson in Oak Ridge, Tennessee, to ten-year-old Hiroshima resident Hideko Tamura, who survives the blast at ground zero but loses her mother and later immigrates to the United States, where she lives to this day—as well as American soldiers fighting in the Pacific, waiting in fear for the order to launch a possible invasion of Japan.”

“Classified for over half a century for political reasons, the full account of this unforgettable story of loyalty, self-sacrifice, and bravery is now being told for the first time ever. The Forgotten 500 is the gripping, behind-the-scenes look at the greatest escape of World War II.”

4. The Bomber Mafia: A Dream, a Temptation, and the Longest Night of the Second World War by Malcolm Gladwell

“In The Bomber Mafia, Malcolm Gladwell weaves together the stories of a Dutch genius and his homemade computer, a band of brothers in central Alabama, a British psychopath, and pyromaniacal chemists at Harvard to examine one of the greatest moral challenges in modern American history.”

“This is the story of the men who fought, of the martinet they hated who trained them well, and of the captain they loved who led them. E Company was a company of men who went hungry, froze, and died for each other, a company that took 150 percent casualties, a company where the Purple Heart was not a medal—it was a badge of office.”

“In Ghost Soldiers Hampton Sides vividly re-creates this daring raid, offering a minute-by-minute narration that unfolds alongside intimate portraits of the prisoners and their lives in the camp. Sides shows how the POWs banded together to survive, defying the Japanese authorities even as they endured starvation, tropical diseases, and torture. Harrowing, poignant, and inspiring, Ghost Soldiers is the mesmerizing story of a remarkable mission. It is also a testament to the human spirit, an account of enormous bravery and self-sacrifice amid the most trying conditions.”

“Based on notes Sledge secretly kept in a copy of the New Testament, With the Old Breed captures with utter simplicity and searing honesty the experience of a soldier in the fierce Pacific Theater. Here is what saved, threatened, and changed his life. Here, too, is the story of how he learned to hate and kill—and came to love—his fellow man.”

“While this book discusses a specific Reserve Unit during WWII, the general argument Browning makes is that most people succumb to the pressures of a group setting and commit actions they would never do of their own volition. Ordinary Men is a powerful, chilling, and important work with themes and arguments that continue to resonate today.”

9. The Woman Who Smashed Codes by Jason Fagone

“In The Woman Who Smashed Codes, Jason Fagone chronicles the life of this extraordinary woman, who played an integral role in our nation’s history for forty years. After World War I, Smith used her talents to catch gangsters and smugglers during Prohibition, then accepted a covert mission to discover and expose Nazi spy rings that were spreading like wildfire across South America, advancing ever closer to the United States. As World War II raged, Elizebeth fought a highly classified battle of wits against Hitler’s Reich, cracking multiple versions of the Enigma machine used by German spies. Meanwhile, inside an Army vault in Washington, William worked furiously to break Purple, the Japanese version of Enigma—and eventually succeeded, at a terrible cost to his personal life.”

“D-Day marked the commencement of the European war’s final campaign, and Atkinson’s riveting account of that bold gamble sets the pace for the masterly narrative that follows. The brutal fight in Normandy, the liberation of Paris, the disaster that was Operation Market Garden, the horrific Battle of the Bulge, and finally the thrust to the heart of the Third Reich―all these historic events and more come alive with a wealth of new material and a mesmerizing cast of characters.”

“On August 6, 1945, Hiroshima was destroyed by the first atom bomb ever dropped on a city. This book, John Hersey’s journalistic masterpiece, tells what happened on that day. Told through the memories of survivors, this timeless, powerful and compassionate document has become a classic “that stirs the conscience of humanity”

12. The Rape Of Nanking: The Forgotten Holocaust Of World War II by Iris Chang

“In December 1937, one of the most horrific atrocities in the long annals of wartime barbarity occurred. The Japanese army swept into the ancient city of Nanking (what was then the capital of China), and within weeks, more than 300,000 Chinese civilians and soldiers were systematically raped, tortured, and murdered. In this seminal work, Iris Chang, whose own grandparents barely escaped the massacre, tells this history from three perspectives: that of the Japanese soldiers, that of the Chinese, and that of a group of Westerners who refused to abandon the city and created a safety zone, which saved almost 300,000 Chinese.”

“In August 1942, Hitler’s huge Sixth Army reached the city that bore Stalin’s name. In the five-month siege that followed, the Russians fought to hold Stalingrad at any cost; then, in an astonishing reversal, encircled and trapped their Nazi enemy. This battle for the ruins of a city cost more than a million lives. Stalingrad conveys the experience of soldiers on both sides, fighting in inhuman conditions, and of civilians trapped on an urban battlefield.”

“D-Day, June 6, 1944, and the seventy-six days of bitter fighting in Normandy that followed the Allied landing, have become the defining episode of World War II in the west―the object of books, films, television series, and documentaries. Yet as familiar as it is, as James Holland makes clear in his definitive history, many parts of the OVERLORD campaign, as it was known, are still shrouded in myth and assumed knowledge.”

15. The Day of Battle by Rick Atkinson

“In An Army at Dawn―winner of the Pulitzer Prize―Rick Atkinson provided an authoritative history of the Allied triumph in North Africa during World War II. Now, in The Day of Battle, he follows the strengthening American and British armies as they invade Sicily in July 1943 and then, mile by bloody mile, fight their way north toward Rome.”

16. Code Name: Lise, The True Story of the Woman Who Became WWII’s Most Highly Decorated Spy by Larry Loftis

“The year is 1942, and World War II is in full swing. Odette Sansom decides to follow in her war hero father’s footsteps by becoming an SOE agent to aid Britain and her beloved homeland, France. Five failed attempts and one plane crash later, she finally lands in occupied France to begin her mission. It is here that she meets her commanding officer Captain Peter Churchill.”

“D-Day is the epic story of men at the most demanding moment of their lives, when the horrors, complexities, and triumphs of life are laid bare. Distinguished historian Stephen E. Ambrose portrays the faces of courage and heroism, fear and determination—what Eisenhower called “the fury of an aroused democracy”—that shaped the victory of the citizen soldiers whom Hitler had disparaged.”

18. The Secret War by Max Hastings

“Spies, codes, and guerrillas played unprecedentedly critical roles in the Second World War, exploited by every nation in the struggle to gain secret knowledge of its foes, and to sow havoc behind the fronts. In The Secret War, Max Hastings presents a worldwide cast of characters and some extraordinary sagas of intelligence and resistance, to create a new perspective on the greatest conflict in history.”

“With the moral stamina and intellectual pose of a twentieth-century Titan, this slightly built, dutiful, unassuming chemist set out systematically to remember the German hell on earth, steadfastly to think it through, and then to render it comprehensible in lucid, unpretentious prose. He was profoundly in touch with the minutest workings of the most endearing human events and with the most contemptible.”

20. The Fall of Japan: The Final Weeks of World War II in the Pacific by William Craig

“From the ferocious fighting on Okinawa to the all-but-impossible mission to drop the 2nd atom bomb, and from Franklin D. Roosevelt’s White House to the Tokyo bunker where tearful Japanese leaders first told the emperor the truth, William Craig captures the pivotal events of the war with spellbinding authority. The Fall of Japan brings to life both celebrated and lesser-known historical figures, including Admiral Takijiro Onishi, the brash commander who drew up the Yamamoto plan for the attack on Pearl Harbor and inspired the death cult of kamikaze pilots.”

For the best books in American History see our list here.