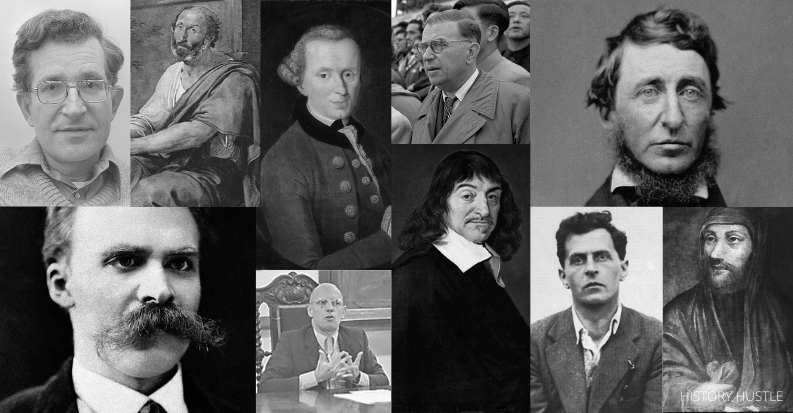 From the dawn of time, great thinkers have pondered the nature of reality, knowledge, and existence in every culture. It can be quite a challenge for the layperson to understand a philosopher’s thought processes— but often quite another to pronounce their names. So here’s a brief guide to some of history’s great philosophers — and exactly how to pronounce their names.

The father of western logic, Aristotle authored around 200 philosophical treaties, of which only 33 survive. Aristotle is so famous you’d be forgiven for thinking you know how to pronounce his name — the anglicized version at least. However, the Hellenised form of “Aristotle” is “Aristoteles” — meaning the correct pronunciation of his name is ARIS-toe-teles.

Frederick Nietzsche posthumously acquired a bad name through his association with Nazisim — somewhat ironic as Nietzsche opposed antisemitism, nationalism, and the pursuit of power. This unfortunate association came about because the philosopher’s fascist sister tampered with his work. So, it seems only fitting to pronounce this much-misrepresented writer’s name correctly as NEE-chuh.

The father of modern philosophy, rationalist René Descartes’s Meditations on First Philosophy, still appears on many modern university syllabuses, but most people know of him from his famous saying, “I think, therefore, I am” Pronouncing his name correctly doesn’t take too much thought once you know how, as the elaborate-looking “Descartes” can be simply vocalized as DAY-Cart.

Eighteenth-century Immanuel Kant expounded a philosophy of freedom, without which he believed moral behavior was impossible. By Kant’s reasoning, if only one course of action was open to a person, their behaviour had no moral worth. It might not be immoral to mispronounce Kant’s name, but there is only one way to pronounce it correctly: K-ahnt.

Philosopher of logic Ludwig Wittgenstein became known as one of the greatest philosophers of the modern era after the posthumous publication of his Philosophical Investigations in 1953. The Austrian-born philosopher’s family adopted their surname in the early nineteenth century. Pronounced VIT-ghun-stine, Wittgenstein did not attempt to anglicize it after obtaining British citizenship in 1939.

Frenchman Jean-Paul Sartre became known as the founding father of twentieth-century existentialism after his teachings about freedom and choice became popular post World War II. Sartre was also known for his literary talents. However, there is no need to get creative with the pronunciation of his name, which is correctly sounded out as SAHR-truh.

Twentieth-century French thinker Paul-Michel Foucault’s philosophy was dominated by the interaction between knowledge and power and how power could use knowledge as a means of control, e.g. by defining expressions of individuality as madness. People are free to pronounce Foucault’s name according to their individual interpretation, but the correct way is Foo-Koh.

Henry David Thoreau approached philosophy as a way of life rather than theory, and his most important work, Walden, considered how human beings could live in harmony with the environment. Thoreau was an American, but his French surname is pronounced Thuh-ROW.

Born in Philadelphia in 1928, analytical philosopher Chomsky is regarded as one of the founders of cognitive thinking. Chomsky believes how the mind gains knowledge is an inherent trait, particularly concerning language. However, understanding how to pronounce Chomsky’s Ukrainian-Jewish name might not come so naturally, so here’s a guide: it’s pronounced NOWM CHOM-skee.

Aristotle also influenced this tenth-century Persian philosopher and physician whose medical texts were the foundation of the curriculum at many western medieval universities. In Europe, he was known as straightforward “Avicenna” (AV-I-SEN-uh). However, his full Arabic name, “Abu ‘Ali al-Husayn Ibn Sina” (pronounced ABU-ALI-al-hussain Iban Seena) might take a little more practice.