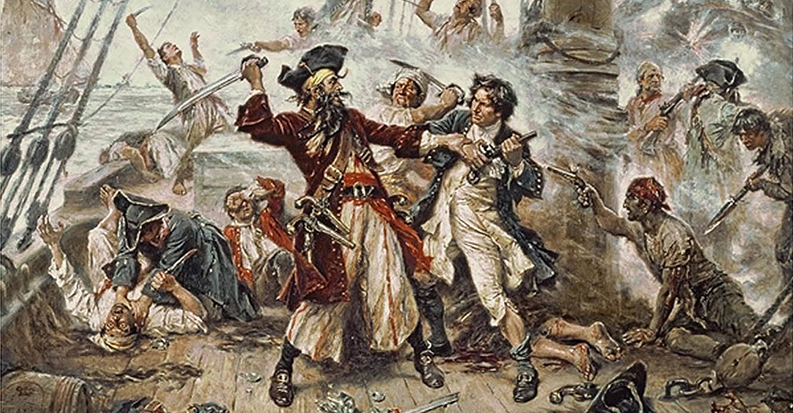 Black Sam Bellamy — The Robin Hood of the Sea

“Black” Sam Bellamy enjoyed a short-lived career in piracy — but it was certainly noteworthy. In scarcely 12 months, this English pirate amassed the biggest fortune of any pirate — all without the cruelty and bloodshed so often associated with other seaborne robbers.

Bellamy saw piracy as a great equalizer — a way for the socially disadvantaged to empower and enrich themselves. This philosophy of freedom and equality, robbing the unworthy rich to free the underclasses they usually oppressed and controlled, led to Bellamy’s crew referring to themselves as “Robin Hood’s men” — and Bellamy himself as “the Robin Hood of the sea“.

From Plymouth to Piracy

Sam Bellamy’s origins are uncertain. Historical records suggest he was possibly born around 1689 in Devon, England. He joined the Royal Navy in his teens — perhaps leaving behind a wife and child. While in the navy, Bellamy probably saw combat during the Spanish War of Succession. However, after the war ended in 1714, the Royal Navy downsized, and Bellamy found himself penniless and stranded in Boston, Massachusetts.

It is at this point that legend fills in the gaps. Bellamy reputedly fell in love with a local woman called Mary Hallett, who he wanted to marry. However, his poverty made him a less than a desirable match for Mary’s parents. So, Sam decided to return to sea and seek his fortune.

Bellamy had made the acquaintance of another Englishman, Paulsgrave Williams, an enterprising jeweler who agreed to finance Bellamy’s purchase of a ship. Bellamy planned to get rich quickly by salvaging treasure from Spanish ships wrecked off the coast of Florida. So compelling was this plan that Williams went from backer to quartermaster to Bellamy’s captain. Early in 1716, the pair set off to sea.

However, Bellamy and Williams arrived too late — the Spanish had recovered their gold. So they switched to piracy, teaming up with Henry Jennings, a “gentleman” privateer and his right-hand man, Charles Vane, to stealing the gold from the Spanish.

However, Jennings and Vane had a reputation for torture and cruelty, which did not sit well with Bellamy and Williams. So they defected to “The Flying Gang”, led by another ex British sailor, Benjamin Hornigold. Amongst Horingold’s most loyal officers was Edward Teach — who later became infamous as the pirate Blackbeard.

Bellamy quickly rose through the ranks of the Flying Gang, receiving command of his own ship, The Mary Anne and winning the admiration of the men. His standing was so high that once the men grew tired of Hornigold’s insistence that English ships were out of bounds, they elected Bellamy as their leader instead.

The “Robin Hood of the Sea”

And so “Black” Sam Bellamy was born — not because of any evil reputation but because Bellamy refused to cover his dark hair with the customary wig, wearing it instead long and tied back. Despite being a successful and unrelenting robber, Bellamy also acquired a reputation of fairness to his captives, avoiding unnecessary bloodshed and often ensuring they reached land safely.

Bellamy began to style himself as “the Robin Hood of the Sea“, and his loyal men happily referred to themselves as “Robin Hood’s men.” However, this had nothing to do with Bellamy’s courteous treatment of captives. Instead, it stemmed from Bellamy’s respect for his crews and his egalitarian view of piracy.

To Bellamy, piracy was a form of social liberation, a chance to overthrow the oppression of the ruling classes who usually dictated the terms. “This flag represents not death, but resurrection,” Bellamy reportedly told his men when initially trying to sell them the idea of switching from treasure hunting to piracy. “Never again will you be slaves of the wealthy. From this day, we are new men. Free men.”

The Prince of Pirates.

This speech demonstrates that, like many pirates, Bellamy did not see himself as above his men but first amongst equals. In April 1717, Bellamy’s crew captured the sloop of a Captain Beer off the New England Coast. Bellamy initially promised to return Beer’s ship — but the crew outvoted him, and so the sloop was sunk. Before putting Beer safely ashore, Bellamy gave a speech. This speech was recorded, capturing Bellamy’s justification for his piracy.

Bellamy began by apologizing for breaking his word. But then he began to deride Beer as “a sneaking puppy” — as were all who “submit to be governed by laws which rich men have made for their own security.”

“They vilify us, the Scoundrels do,” said Bellamy of the elite, “when there is only this difference, they rob the poor under the cover of Law, forsooth, and we plunder the rich under the protection of our own courage.”

Captain Beer continued to claim the moral high ground, maintain his pride in not breaking the laws of “god and man.” But Bellamy remained confirmed in his opinion that he was on a mission of social rebellion and as good a man as any British Admiral or aristocrat. “I am a free Prince,” he declared, “and I have as much authority to make war on the whole world, as he who has a hundred sail of ships at sea, and an army of 100,000 men in the field; and this my conscience tells me.”

The End of the Prince of Pirates

By the time of his encounter with Captain Beer, Bellamy had captured more than 50 ships and amassed a fortune of around $120 million. According to Forbes rich list, in less than a year of piracy, he had become the number one earning pirate of all time.

“Lads, we’ve gotten enough,” Bellamy told his men and the fleet turned towards New England, perhaps with the hope of disbanding and sharing the treasure. But it was not to be. Instead, on the night of the 26th April 1717, the Whydah, Bellamy’s flagship, capsized in a storm off the coast of Cape Cod. It took four and a half tonnes of gold and silver to the sea bed — and most of the crew, including Bellamy himself.

Sara Schubert, “Piracy, Riches, and Social Equality: The Wreck of the Whydah off Cape Cod” Historical Journal of Massachusetts Volume 34, No. 1 (Winter 2006).