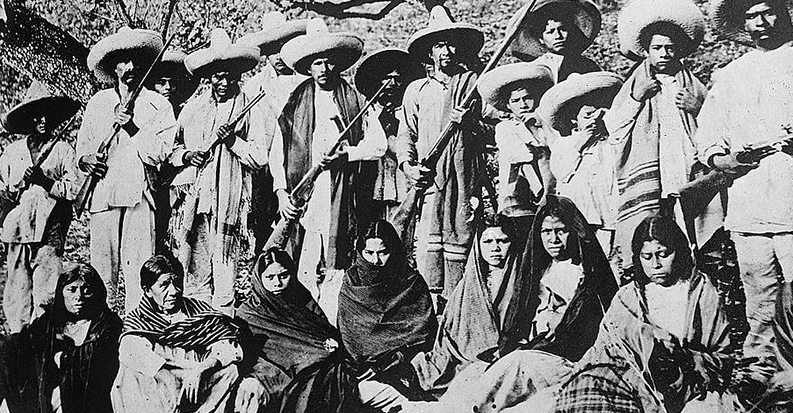 When people think of the Mexican Revolution, they think of Porfirio Díaz or Pancho Villa. Very little think of the monumental significance of some women during the war. These women were the Las Soldaderas, “fighters” who assisted both the federal and rebel armies of the Revolution. But why were these women so important to the war? Well, get ready for a wild ride, this may get a little bumpy.

Why Did Women Become Las Soldaderas?

There are many reasons why women became fighters during the Revolution. The majority were located in Northern Mexico in the Federal Army before its demise in 1914. These women either followed their men into battle, but also fought the battle themselves.

As there were no commissaries for the soldiers, these women kept the men company by cooking, cleaning, cared for the sick, buried the dead, and some sadly were prostitutes. Women during this time were expected to follow their lovers, brothers, fathers, husbands, etc. into the military. Hard to believe this was only 100 years ago right?

That’s right, the Mexican Revolution took place between 1910 and 1920, with many bloody and ruthless battles in between. But many fought in the battle themselves disguised as male soldiers, donning male clothing and cross-bullet belts.

Two of the most famous soldaderas were Angela Jiménez (male name Angel Jiménez) and Petra Herrera (male name Pedro Herrera). These two women dressed as men and fought in the battle. These two brave souls rose in rank (Herrera a colonel and Jiménez a lieutenant) and became known for their strong leadership and the power of women in combat.

Unfortunately, a soldaderas life was not all wine and roses. After the war, their roles were romanticized in books, film, literature, art, and songs. Their carefree sexualized sweetheart depictions were not how life really was for them. Some were forced into the role by male soldiers who kidnapped them and forced them to join. Another reason was protection, since men were scarce in villages, they needed a way to become protected from not only kidnappers but the opposing troops.

Women would often walk behind the camps which caused a higher chance of rape and slaughter which the opposing army saw as a combat strategy. By removing the soldaderas, it would weaken the army. Pancho Villa himself saw the women as freaks and resented women warriors, so he ordered the execution of 90 soldaderas.

It Took A Long Time for Soldaderas to be Recognized

After the war, these women’s military contributions were devalued. Women who achieved a high rank were not given their due, and all women in the military were lumped under the term soldaderas, regardless of their standing.

Since the military classified soldaderas as wives, very few women veterans received military pensions. Women who did receive a pension were not only restricted from re-marrying, but also from participating in the military. General Amaro banned soldaderas from serving in the army in 1925. Because of this, their service went unrecognized and they had to go back to their lives as wives and mothers. It wasn’t until the later part of the 20th century due to women becoming more politically active and exert influence outside of the home in part with the help of the Chicano movement.

The revolutionaries and unarmed Adelitas.After the romanticizing of soldaderas, modern-day Chicana women see the image of these women as feisty or promiscuous followers as a negative connotation. Chicana artists and writers have used their talents to reverse this image and tell the true story of soldaderas. Novels, poetry, murals, and dances have been used to reclaim the honor of these women.

They have not been separated into the fighting soldaderas (female soldiers), and the legendary “Adelita” to refer to the submissive obedient women who followed the soldiers providing them aid. Who is Adelita you ask? Well, no one knows her identity for sure, but we do know it refers to a woman who joined the Revolution. This woman became popularized in “La Adelita”, one of the most popular ballads of the Mexican Revolution.

See? We women have always been pretty badass with some cajones to boot. The whole “you can’t do it because you’re a woman” mentality has been challenged throughout history, and we continue to beat those odds.