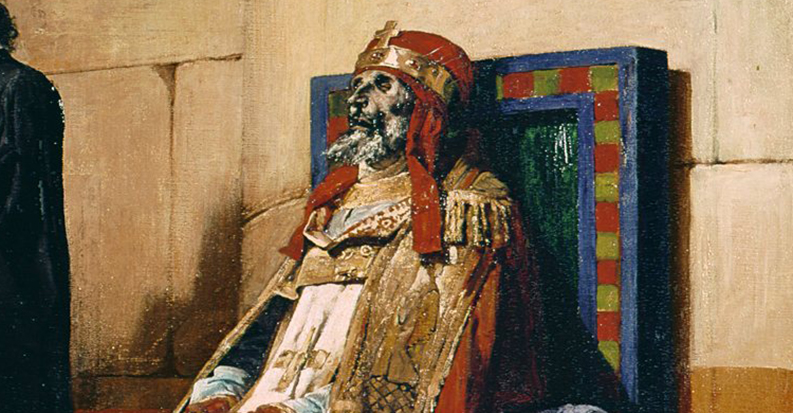 Pope Formosus, before he became a violated corpse, ascended to the Papacy in 891 AD to a unanimous vote from his peers. From there, he successfully reigned five years before succumbing to a stroke in 896.

The Pope after him only lasted 15 days before dying of alleged poisoning (a relatively common death for Popes in the early middle ages).

When is it too late to dig up someone’s corpse to stand trial?

After the poisoned guy, Stephen VI became the Papacy’s next victim, and, only a few months into his reign, asked a weird question: When is it too late to dig up someone’s corpse to stand trial? Some would say never; some would say what kind of strange question is this. But Stephen, a courageously evil Pope, said, “7 months is good; okay, guys grab some shovels.”

Around 897 AD, Stephen ordered the Formosus’s corpse dug up, dressed in papal garb, seated on a throne, and interrogated. Since the corpse had a difficult time talking on its own, the rotting Mass of tissue was allowed a deacon to answer on his behalf. How thoughtful.

Already being dead; however, Formosus had a tricky time defending himself and inevitably lost the trial, being found guilty of perjury and illegitimately ascending the Papacy. And to be sure everyone got the point, Stephen had Formosus’s three blessing fingers cut off, buried him, dug him up again, and finally decided to toss his corpse into the Tiber.

For these acts, some might call Stephen psychotically evil, and, based on his participation in the Cadaver Synod, it would indeed appear he was a particularly disturbed individual.

However, one does have to understand something. While his actions are objectively insane, Stephen VI was, like many historical figures, a product of his time.

In the 21st century, the Papacy wields a mere fraction of the political power they swung in the 9th century. Many Popes throughout the medieval period exerted kinglike influence, signaling to the actual kings that they held valuable influence to be exploited, often through violent force. This turmoil turned the Papacy into a massive king of the influence hill, a chaotic, cutthroat institution that intertwined the nobility and Church into one.

These historical and political circumstances helped create the monster that was Pope Stephen VI.

That creation moment started the moment Stephen was elected Pope. Because, long before his election, Stephen had been appointed Bishop by none other than Formosus himself (gasp). That may not sound so bad if having two Bishops of Rome was against the rules. In other words, by promoting Stephen to a bishop, Formosus had legally shot down both their rights to the Papacy.

On top of that legal conundrum, Stephen also had a noble family pressuring him to delegitimize Formosus for an act he performed that snatched away from their ruling rights to the Holy Roman Empire.

Therefore, if Stephen could delegitimize Formosus’s reign, he could legally legitimize his own while appeasing the power-hungry nobles. However, to accomplish this feat while he was Pope, Stephen needed to put his former/dead co-worker on trial. The primary objective was to make everything Pope Formosus did during his Papacy obsolete, thereby making Stephen’s rule legitimate.

While Stephen did succeed in the legitimizing department, he monstrously failed at winning the hearts and minds of his flock. When medieval Italy got wind of Stephen’s actions, a mob rolled through the holy sea and tossed the now ex-Pope in jail, where he died via “externally administered” asphyxiation.

Even back in the early middle ages, Stephen VI, and his morbidly absurd trial, was simply too much for medieval minds to handle.

In all of history, there is no event quite like the Cadaver Synod—that can only be described as Weekend at Bernie’s has a love child with House of Cards, but only after meeting at Sunday morning Mass.

As for its place in medieval history, the Cadaver Synod appears to be merely another morbid repetition commonly seen during the 9th century.

From 876 AD to 965 AD, there were 24 elected Popes, in contrast to only nine during the 20th century. Historians estimate that 7 of those 24 Popes died under suspicious circumstances, while five died from assassinations by rivals and upper-class families seeking revenge or political gain.

Still, the Cadaver Synod protrudes from the rest like a rotting thumb on an otherwise healthy hand. Despite the event being just one historical oddity amongst dozens, it is by far the most memorable.