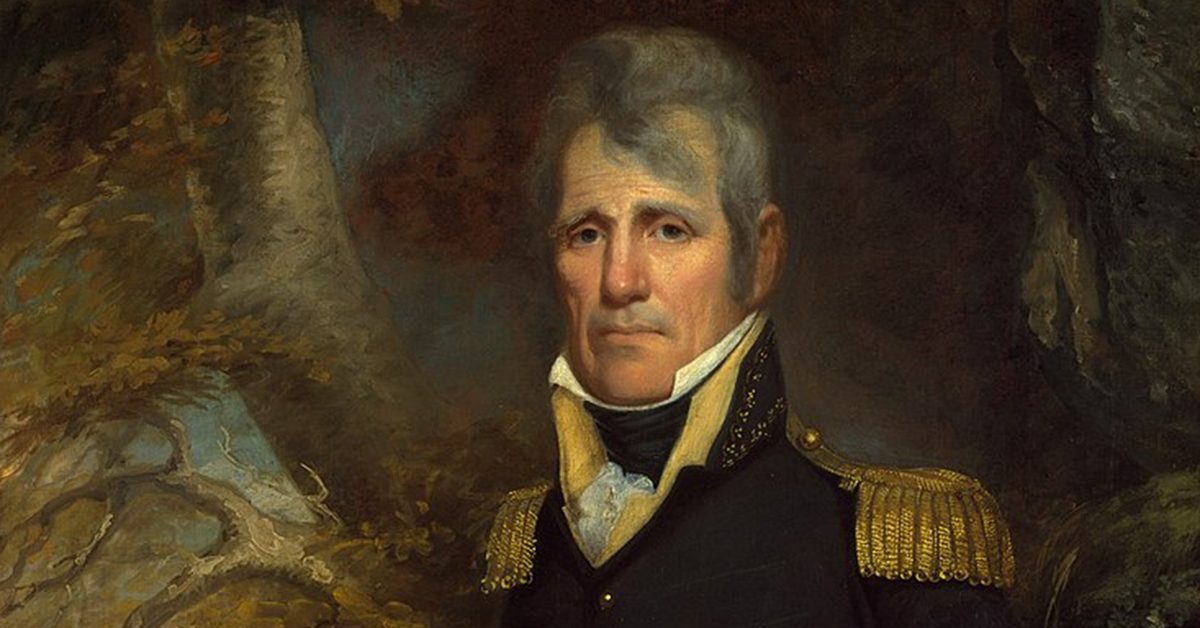 As much as your uncle likes to tell you on his flip phone about how things were better back in his day, that’s not the case. You can say that about music, for sure, but not the US presidency.

The US presidency has always been a messy affair. When we think about American Presidents our minds are immediately filled with crazy scandals, election conspiracies, hair sniffing, and of course, the color orange. There have been some crazy Presidents in the history of the US.

In this article, we’re looking at one of the most controversial Presidents to ever live – Andrew Jackson.

Andrew Jackson was the seventh president of the United States. He was born on March 15, 1767, in the Carolinas where his father died only three weeks before little Andrew was born. Andrew Jackson had a very hard life growing up. He grew up very poor in the WaxHaws area before the Revolutionary War came around and made everything worse.

He lost his brother Hugh Jackson in the Battle of Stono Ferry in 1779 and at only 13 years old, little Andrew had to pick up his sword and defend his nation and so he joined the army. He was later captured by the British during the Revolutionary war with his other brother Robert. While in British custody, Andrew had an experience that scarred him for life…literally.

One time Andrew Jackson was ordered to polish the shoes of a British Officer. Andrew Jackson decided he’d rather get slashed in the face than polish the shoes of some British soldier (who was probably a snob, let’s be honest) and that is exactly what happened. The Redcoat slashed Andrew’s left hand and his face with his sword, leaving him with a permanent scar on his face and bitterness toward the British. The Beatles probably wouldn’t have made it in America if Andrew Jackson was president then. 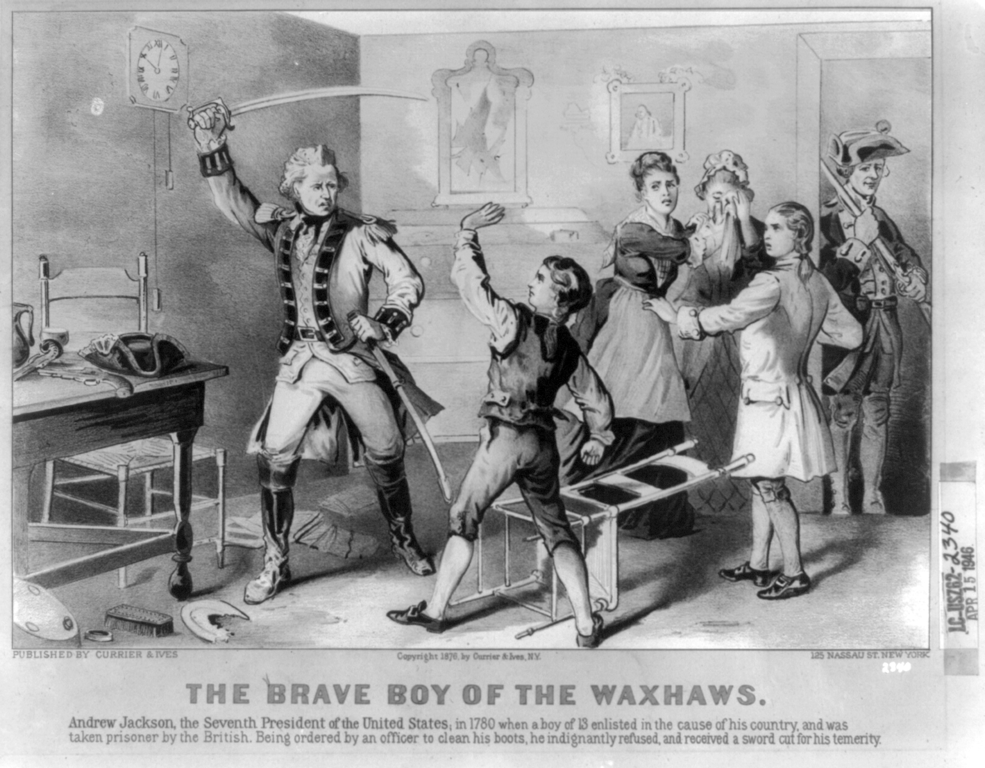 During that time as a prisoner, Jackson lost both his mother and his brother leaving him with no more close family.

Jackson was later released and went on to study law in Salisbury, North Carolina. After being called to the bar in 1787, he became the prosecuting attorney in the western region of North Carolina which is now known as Tennessee.

He later started a law practice and became a wealthy man, acquiring many lands, his home the Hermitage, and in true “rich white man in the 1700s” fashion, he bought some slaves.

He quickly rose up the political ladder and became the first representative in the US House of Representatives from Tennessee. After that, he was elected to the U.S senate where he served for a bit before resigning and becoming the judge of Tennessee’s superior courts. Right after that is when Jackson was called to lead the state militia around the time war with Great Britain was looming in 1812.

When it came to war, Andrew Jackson was like Beyonce on stage. He always killed it (terrible pun premeditated and very much intended).

He won so many of them and was considered a hero at the time but just like a celebrity tweet from a decade ago, a lot of those victories have aged very badly.

During the war, Jackson became a war hero, leading 50,000 volunteers to the Battle of Tohopeka against the Creek Indians who were aligned with the British. He went on to defeat the British in the Battle of New Orleans in 1815. This battle was the final one in the war and propelled Jackson from a hero of the West to a national hero.

The Iconic Election and his rise to President

Andrew Jackson’s political influence and popularity began to spread wide and in no time people were recommending him for the presidency. He first declined the job but in 1824 he ran against John Quincy Adams and lost. The 1824 election was decided by the House of Representatives because neither Jackson nor Adams won a majority in the electoral votes. The speaker of the House Henry Clay voted in favor of John Quincy Adams. Adams later appointed Clay as his Secretary of State which gave credibility to rumors of corruption in the election.

These events set the stage for the 1828 election. This was not only the election that saw Andrew Jackson become the president but also the one that set the stage for modern elections as we know it. Want to know the origin of election campaigns, smear campaigns, and candidates talking smack about each other for public approval? It was this one.

This was the first time the public had a deciding power in the US elections and of course, things got really messy. Andrew Jackson and John Quincy Adams went back and forth, attacking each other’s personalities. The one who suffered the most of this was Andrew Jackson’s wife who was accused of being an adulterer and publicly ridiculed by Jackson’s opponents.

Andrew Jackson finally won the election because regardless of how crazy he was, people still loved the man.

To call Andrew Jackson crazy would be generous. He was a very feared man with a hot temper. He always walked around with a hickory cane and thus earned the nickname ‘Old Hickory’. But do not be fooled, Old Hickory would beat you up with his cane if you tested his patience as he once did to a man who tried to assassinate him.

And yes, what is a US president story without an assassination attempt. Andrew Jackson was the first President to almost be assassinated. Robert Lawrence who was a local house painter made the grave mistake of firing his gun at Andrew Jackson while the president was leaving a congressional funeral. Unfortunately for him, the gun misfired. President Jackson then furiously pounced on Robert and beat him with his cane till people pulled him off.  While on the floor the assassin pulled out another gun which also misfired.

One thing Andrew Jackson was known for was his love of dueling. Now let’s make sure we’re on the same page about exactly what’s going on here. Dueling is the crazy conflict resolution method where two people decide to shoot guns at each other until one of them was killed or wounded. It’s like a game of rock paper scissors but with a weapon more fatal than rocks or scissors and no papers. Andrew Jackson was so fond of dueling that he did it about 100 times in his lifetime. 100 times he risked his life because a good old conversation was too soft for old hickory. If he had an issue with you, he had to make sure your entire life flashed before your eyes so you can regret the point where you decided to mess with Andrew Jackson. He did this 100 times so you know he was damn good at it.

His most famous duel was with Charles Dickinson – not to be confused with Charles Dickens who wrote Oliver Twist which could have been a story about Andrew Jackson always wanting more blood on his hands.

Charles Dickinson had accused Andrew Jackson of cheating on a horse race bet and also made the grave mistake of talking bad about Jackson’s wife. He also called Jackson a coward and so Jackson, who has no concept of fear or being the bigger man, challenged Charles to a duel.

During this duel, Charles fired first and hit Jackson in the chest, close to his heart. Andrew Jackson, being the badass that he is, shook it off, covered the wound with his hand to stop the blood flow, and then shot back at Charles and killed him. Andrew Jackson went on to live with this bullet in his chest for the rest of his life.

I probably couldn’t live with a piece of glass in my palm for three minutes.

One of the events Andrew Jackson is known for is the Trail of Tears – an event that saw the displacement of thousands of Native Americans in the 1830s because Americans wanted ownership of their lands. I assume Andrew Jackson might have wanted to engage in multiple duels with the natives for the lands but he put that aside for his other favorite thing…war.

Congress passed the Indian Removal Act to open negotiations with the natives to remove them to the west of Mississippi. It allowed the president to say “Hey we know this is your land but there are lots of good things on this land and we need to have it so can you please get out of here?.”

But the darkest part of the Trail of Tears involves a personal relationship between Andrew Jackson and one of the Cherokees.  To understand this we have to go back to another battle called the battle of Horseshoe Bend. No, it was not a face-off to determine who can make a horseshoe with the most accurate bend.

But here comes the deeper part of the story. See Andrew Jackson as hardcore as he was, was still a human being at war and was not above death. In the Battle of Horse Shoe Bend, Jackson was about to be killed by a Red Sticks soldier when a Cherokee named Junaluska saved him from death. Andrew Jackson gave Junaluska his word and said “As long as the sun shines and the grass grows, there shall be friendship between us.”

Well, it looks like the sun may have stopped shining and the grass stopped growing because when Andrew Jackson became president, he seized the Cherokee’s lands and sent his beloved friend and the Cherokees on the Trail of Tears.

Junaluska, who was definitely pretty pissed about the situation said these words, “Had I known during the battle what I know now, American history would have been differently written.”

Well, hindsight is always 20/20 and American history cannot be rewritten.

Andrew Jackson is by far one of the craziest American Presidents to ever live. Some consider him a hero and others not so much.

One thing I know is that it’s really hard to look at the life of any old white man who lived in the 7th century and not find egregious acts against humanity somewhere in there. For some, we might look the other way because of some bigger contributions they made to the country but I doubt we can do that for Andrew Jackson and that’s perfectly understandable.

He is known to be the founder of the Democratic Party but if Jackson was alive today he probably would not be very happy with the Democrats of today and that’s probably a good thing.