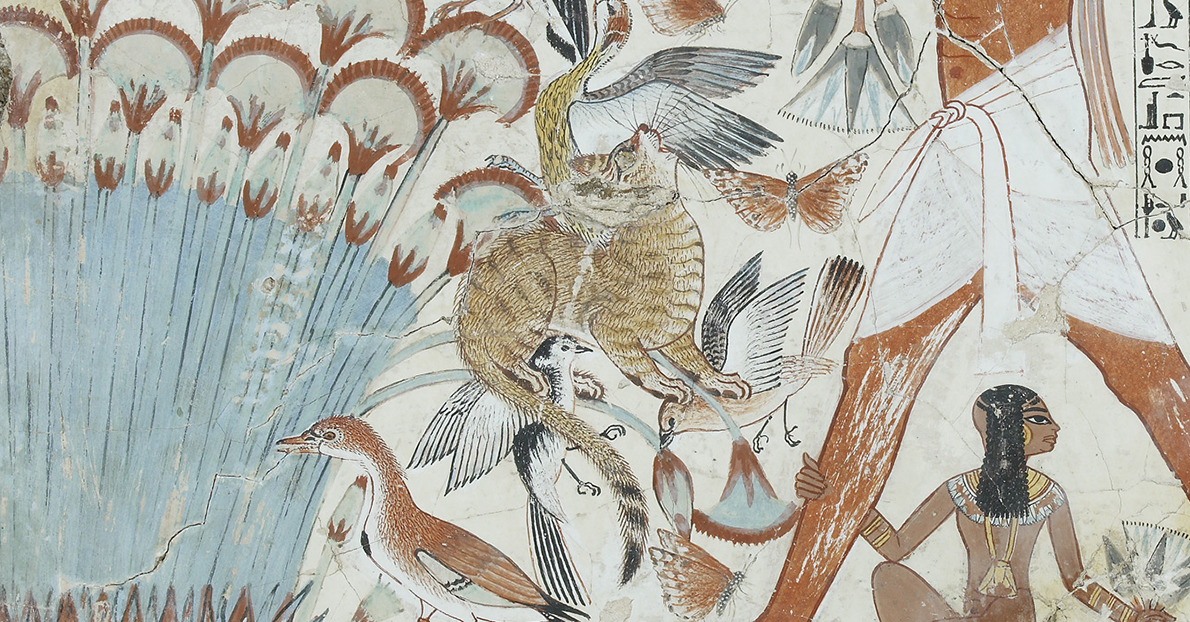 The pampered house cats we love so much share a long history with us, one that flowered in Ancient Egypt some 10,000 years ago as two species of wildcats made their way into homes and hearths — the African wildcat (Felis sylvestris lybica) and the jungle cat (Felis chaus). The jungle cat has a calmer temperament than its African counterpart and as a result, was domesticated more frequently. As the two species interbred over time, a new species evolved that was a close relative of the modern-day Egyptian Mau.

Cats were associated with goddesses that were considered quite powerful.

It wasn’t long before people realized these cats avidly hunted rats, mice, and other pests that ravaged their food stores. Of course, folks wanted the cats to return so they began leaving out tasty treats — things like fish heads, for instance. This turned into a win-win situation for people and cats, who gained a steady supply of food and a safe place where they could avoid predators.

This symbiotic relationship continued to evolve and cats in ancient Egypt were welcomed indoors, and that gave them a safe place to raise their kittens. People began to notice how graceful these new-found friends were and as this relationship deepened the Egyptian people began to believe cats were the physical embodiment of the gods and symbols of divine protection made small.

“The Egyptians looked at the cat the same way they looked at everything, as a way to explain and personify the universe,” said Egyptologist Melinda Hartwig, the curator of Ancient Egyptian, Nubian, and Near Eastern Art at Emory University’s Michael C. Carlos Museum in Atlanta, per HowStuffWorks.

But she notes Egyptians didn’t worship cats. Instead, they believed cats carried divine energy inside them. Overall, most people thought domestic cats carried the divine essence of Bastet (or Bast), a cat-headed goddess that symbolized fertility, music, domesticity, dance, and pleasure. Other cat gods developed over time; including the lioness-headed goddess, Sakhmet, considered to be a warrior goddess and the goddess of healing, and the cat god Bes, a rather enigmatic fellow that’s portrayed as short and squat, with jolly features that sometimes took on feline grace. Considered a protector of children, Bes wandered freely throughout the world and home was wherever people were.

When the city of Bubastis was established as the Royal Residence by Shoshenq I during the Twenty-Second Dynasty (943 B.C. to 720 B.C.) Bast was given great power, as were her smaller domestic counterparts, who flourished as a result.

With increasing domestication, cats in ancient Egypt’s diets changed as they were offered food by people thankful for their help, and through breeding programs, certain characteristics were refined.

Then something truly remarkable happened: People discovered their cats made good hunting partners, which is pretty amazing when you consider that our pint-sized panthers are adamantly independent. But those of us who own cats (including me) love them because cats are their own bosses. They are also playful and loving and the Egyptian people learned to love cats for these reasons.

During Egypt’s New Kingdom period, which stretched from the 16th century B.C. to the 11th century, B.C., the idea of cats as hunting partners really came into its own. Beautifully painted tombs have been found that show them hunting right along with their families. But what’s really fascinating here is that family members are portrayed wearing their best clothes and expensive jewelry, something that would make hunting lugubrious.

And these paintings themselves are lively, bursting with birds and fish, and usually featuring a cat capturing them. But for the Egyptian people, these scenes were more than just colorful “fishing and fowling “paintings because they portrayed the triumph of order over chaos.

Perhaps one of the most intricate hunting scenes featuring a domestic cat is painted on the tomb of Nebamun. The eye of the cat in this painting is decorated with gold inlay. It’s the only part of this elegant mural where the gold inlay is used and it gives the eye a life-like gleam. The cat can be seen restraining a wild bird, and thus is acting as an “agent of order.” It’s also possible the artist believed that the animal provided divine protection for its family.

Some of the most charming depictions of cats in ancient Egypt on tombs show them sitting under or beside the chair of the woman of the household. This symbolizes the cat giving protection and friendship and this was especially notable because cats were associated with goddesses that were considered quite powerful.

The Egyptian people didn’t differentiate between wild and domestic cats, rather all cats were called “Miu” or “Miut,” meaning “he or she that mews” It’s unclear where this name originated but it’s thought to be an onomatopoeic reference to the meowing sounds a cat makes. Some people have also suggested it may have originated from the word “Miw” (to see.) And in general, people didn’t name their cats, other than being called Miu, or Miut. On rare occasions, the cat was named “Nedjem,” (sweetie). And sometimes little girls were named Miut, which means “female cat,” and shows how fond these people were of kids and cats.

Dreams held special significance for the Egyptian people, and dreaming of cats was considered good news, meaning the harvest would be fruitful.

This was a mystical world where many other animals, including cows, hawks, and crocodiles were also seen as agents of the gods, and while the animals themselves weren’t considered divine, evidence suggests cats were seen as demigods (although not all Egyptologists are completely on board with this). One theory notes that because cats in ancient Egypt were considered semi-divine, everyday people weren’t allowed to own them. Only pharaohs, thanks to their high status, could own cats. And it’s thanks to this that cats received special protection, meaning that it was considered treason if someone harmed or killed a cat.

Throughout much of Egyptian history, there were strict penalties for anyone who killed a cat — accidentally or otherwise, especially as the goddess Bast gained in popularity. At that time, killing a cat was punishable by death. The Greek Historian Diodorus Siculus ( 91 B.C. – 30 B.C.) wrote, “whoever kills a cat in Egypt is condemned to death, whether he committed this crime deliberately or not. The people gather and kill him.”

He recounts the story of “an unfortunate Roman, who accidentally killed a cat” and “could not be saved, either by King Ptolemy of Egypt or by the fear which Rome inspired.”

While anyone who harmed a cat suffered steep penalties, numerous mummified cats in ancient Egypt have been discovered and had obviously been purposely killed. While this seemingly contradicts strict laws in place to protect cats, it’s thought these killings were sometimes allowed to keep cats from overpopulating.

Some of these mummies were beautifully preserved. That’s especially true for a remarkable find in 2018, when a 4500-year-old-tomb was recently discovered in the Saqqara necropolis, on the outskirts of Cairo, Egypt. The tomb was stuffed with dozens of mummified kitties, a bronze statue of Bastet, and 100 gilded wooden cat statues. They were accompanied by mummified scarab beetles, which were also sacred to the Egyptian people.

According to Diodorus, when a beloved pet cat died, human family members mourned deeply, shaving their eyebrows. The pet was wrapped in linen, “treated with cedar oil such spices as have the quality of imparting a pleasant odor and of preserving the body for a long time.” The cat would be buried with mice, rats, and milk. While many pet cats in ancient Egypt were killed in order to accompany their owner into the afterlife, some cat sacrifices took a rather sinister turn, with millions of cats being killed, either by blunt force trauma or strangulation and mummified. Kittens were preferred because they could easily fit in small mummy containers. After being mummified they were sold to worshippers who offered them as sacrifices to Bast or buried them with their loved ones. In one really amazing discovery in 1888, a tomb containing the remains of 80,000 feline burials was found in Beni Hassan, near modern-day Minya in Egypt.

We can be glad this custom is no longer practiced and our cats are free to live out their lives with us. And they have captivated us for thousands of years because a wild heart still beats under that soft fur. Thanks to their ancestors and ancient Egyptian owners, we can now call these beautiful creatures our friends.